Last week’s police raid in Belgium which broke up a meeting of the country’s Catholic bishops – who were discussing how to deal with the paedophile priest crisis – took the Vatican by complete surprise.

Cardinal Tarcisio Bertone, the Vatican Secretary of State – Pope Benedict’s number two – was furious when he learned about how the police prevented the bishops from leaving the building where they had been meeting for nine hours, and took away their mobile telephones to prevent them communicating with their staff or with the Vatican.

The police seized files not only from the headquarters of the Catholic Church in Brussels but also took away the laptop belonging to the former head of the Church in Belgium, Cardinal Godfried Danneels.

They also allegedly profaned the tomb of at least one former Belgian cardinal at the cathedral in Mechelen during what seems to have been a frenetic search for possible incriminating documents.

Cardinal Bertone angrily told reporters during a conference he was attending at a Catholic University in Rome that not even communist states dared to treat Church authorities and Church property in this way. He summoned the Belgian ambassador to the Vatican and handed him a formal protest note. 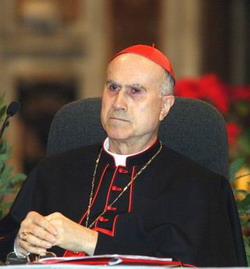