His Grace Mgr Charles J. Scicluna was born of Emanuel and Maria Carmela née Falzon in Toronto, Canada, on 15 May 1959.  The Scicluna family moved to Qormi, Malta, in 1960 and to Lija, Malta, in 1976. Mgr Scicluna was educated at Saint Sebastian Primary School, Qormi, at the Saint Joseph Secondary Technical School, Paola, and at Saint Edward’s College, Cottonera.  He entered the Law Course at the University of Malta in 1976 and he graduated Doctor of Laws in 1984.  After completing his Seminary studies and a Licentiate in Pastoral Theology at the Faculty of Theology, Tal-Virtù, he was ordained to the Roman Catholic priesthood by the Archbishop of Malta, Monsignor Joseph Mercieca, on 11 July 1986.  Monsignor Scicluna was sent to read Canon Law at the Pontifical Gregorian University in Rome and obtained the doctorate in Canon Law with specialization in Jurisprudence in 1991. After his Rome studies Mgr Scicluna worked on the Malta Metropolitan Tribunal as Defender of the Bond and was lecturer in Pastoral Theology and Canon Law at the University of Malta. He served in the parishes of Attard, Saint Gregory’s Sliema and Iklin, Lija.

He also served as Vice Rector at the Major Seminary between 1994 and 1995 when he was called to the Vatican to work on the Supreme Tribunal of the Apostolic Segnatura as Substitute Promoter of Justice.  In 1996 he was appointed Postulator for the cause of beatification and canonisation of Dun Ġorġ Preca. In October 2002, Monsignor Scicluna was nominated Promoter of Justice at the Congregation for the Doctrine of the Faith detailed to investigate and prosecute the more grave crimes reserved to the exclusive competence of the Congregation. He has also lectured widely on issues concerning child protection in the Church, visiting a number of local churches in Europe, Asia, Africa, the Americas, and Australia. While working in Rome, Mgr Scicluna also helped with chaplaincy work at the Convent of the Nuns of Saint Bridget, Piazza Farnese, and as Extraordinary Confessor at the Venerable English College in Rome. Mgr Scicluna is a Visiting Lecturer in Penal Processes at the Pontifical Gregorian University (Rome). On 6th October 2012, Pope Benedict XVI nominated Mgr Scicluna as Auxiliary Bishop of Malta and Titular Bishop of San Leone. He was ordained Bishop on 24th November 2012. On 28th November 2012, he was nominated member of the Vatican’s Congregation for the Doctrine of the Faith.

The full blazon: Gules a horse rampant argent between in dexter chief a crescent moon of the second and in sinister chief a rose or barbed and seeded vert. The heraldic arms of Bishop Scicluna take their inspiration from the arms traditionally assigned to the Scicluna surname on the Maltese Islands which feature a red field (or background) charged with a white/silver horse rampant and a white/silver crescent moon. Monsignor Scicluna has added the yellow/ golden rose with green seeds and leaves.

The red field reminds us of the cloak of Christ at his passion “dipped in blood” (Rev. 19, 13): «Then Pilate took Jesus and scourged him. And the soldiers plaited a crown of thorns, and put it on his head, and arrayed him in a purple robe; they came up to him, saying, “Hail, King of the Jews!” and struck him with their hands» (John 19, 1-3).

The white/silver horse reminds us of the vision described by the Apostle John concerning Jesus Christ himself in the Book of Revelations, chapter 19, 11 – 16: «Then I saw heaven opened, and behold, a white horse! He who sat upon it is called Faithful and True (Fidelis et Verax), and in righteousness he judges and makes war. His eyes are like a flame of fire, and on his head are many diadems; and he has a name inscribed which no one knows but himself. He is clad in a robe dipped in blood, and the name by which he is called is The Word of God. And the armies of heaven, arrayed in fine linen, white and pure, followed him on white horses. On his robe and on his thigh he has a name inscribed, King of kings and Lord of lords».

The white/silver crescent moon reminds us of the beautiful image of stability found in Psalm 72: «Let the mountains bear prosperity for the people, and the hills, in righteousness! May he defend the cause of the poor of the people, give deliverance to the needy, and crush the oppressor! May he live while the sun endures, and as long as the moon, throughout all generations!». The crescent moon is also an image of the Blessed Virgin Mary and of the Church, the Bride of Jesus, with reference to the bride in the Song of Songs 6, 10: «Who is this that looks forth like the dawn, fair as the moon, bright as the sun, terrible as an army with banners?».

The yellow/golden rose reminds us of yet another image of the Blessed Virgin since the bride in the Song of Songs is compared to a perfumed flower (Song of Songs 4, 12 – 14): «A garden locked is my sister, my bride, a garden locked, a fountain sealed. Your shoots are an orchard of pomegranates with all choicest fruits, henna with nard, nard and saffron, calamus and cinnamon, with all trees of frankincense, myrrh and aloes, with all chief spices».

The Motto in Latin: FIDELIS ET VERAX (Faithful and True) is taken from the Book of Revelations 19, 11. It is a title given to the rider of the white horse who is Jesus Christ himself. The Christian knows the Good Shepherd to be loyal and faithful to his words. He will not deceive his flock. The Bishop is chosen from the flock to be a shepherd in the image of the Good Shepherd who is Faithful and True. 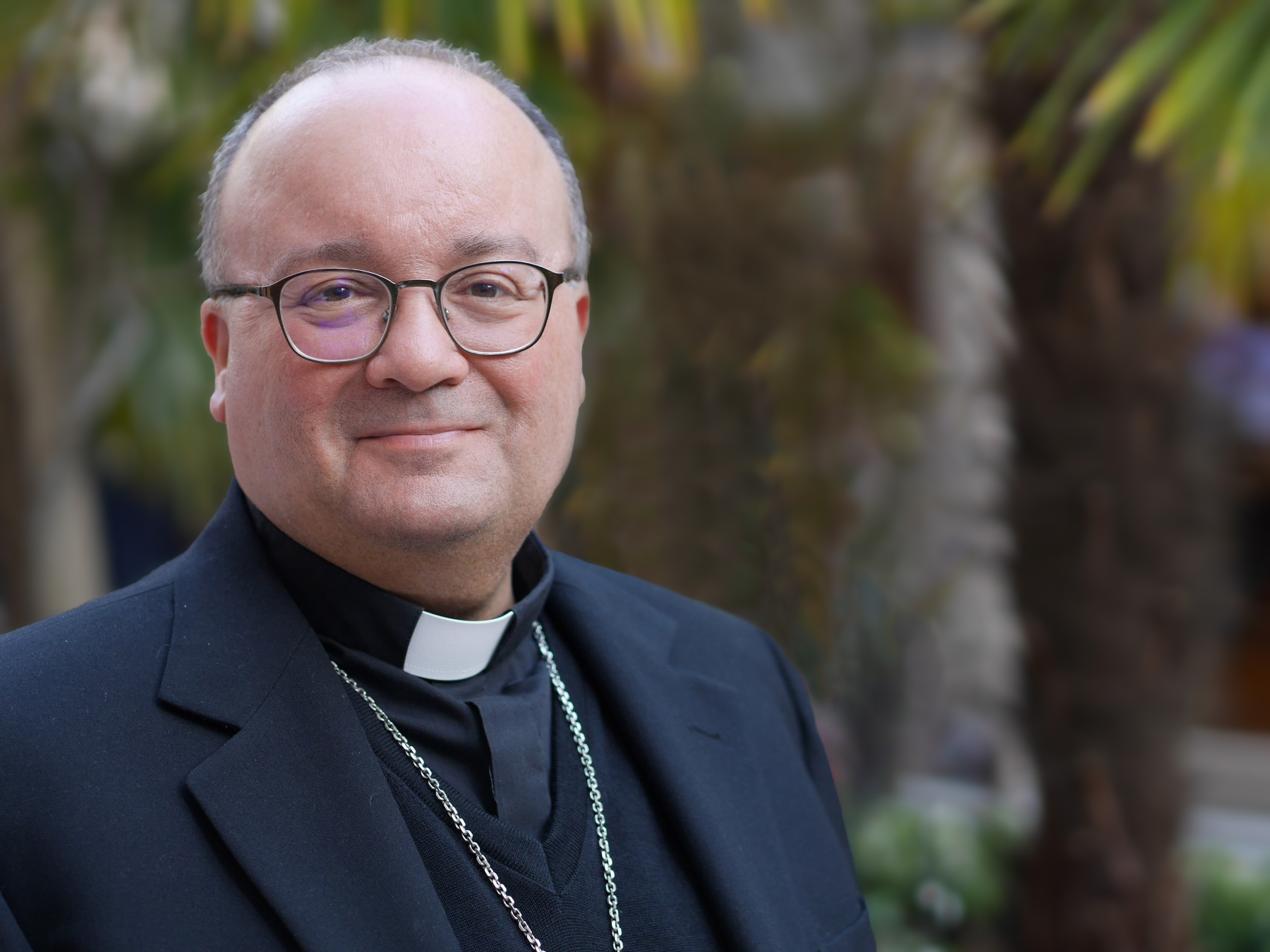