The pontiff tapped Maltese Archbishop Charles J. Scicluna and Spaniard Fr Jordi Bertomeu, the same duo he had sent to Chile in 2018 in the aftermath of the media firestorm over allegations that Bishop Bishop Juan Barros of Osorno covered up the abuse of notorious pedophile Fr Fernando Karadima, who was found guilty by the Vatican in 2011 of sexually abusing minors. Karadima was removed from the clerical state in 2018.

After their mission to Chile, Scicluna and Bertomeu came back with a 2,600-page dossier that led to the pope apologizing for mishandling the situation in Chile. After a meeting with Pope Francis in Rome, every Chilean bishop offered their resignation.

The mission to Mexico, set to take place March 20-27, was announced by the Mexican bishops’ conference, stressing that it is not an investigation, but an effort to help the local church fight clerical sexual abuse.

Mexico has the world’s second largest Catholic population, after Brazil, and it is only now beginning to reckon with what many believe are decades of clerical abuse and cover-up.

Mexico’s Pontifical University recently launched CEPROME, an interdisciplinary centre for child protection, that works with the Pontifical Gregorian University’s Centre for Child Protection in Rome. Both Scicluna and Bertomeu have been part of events held at CEPROME.

Recently, Pope Francis sent a video to CEPROME, urging them to continue their efforts to clean up the church, even when facing threats of some willing to “hire hit-men” to prevent the necessary clean up.

Despite the visit being presented as an “assistance” for the local church, it will also serve as a fact-finding mission: The Vatican’s embassy in Mexico City, headed by Italian Archbishop Franco Coppola, has asked victims to come forward to speak with Scicluna and Bertomeu, stressing that they would be at the “disposition of all those who want to share their experiences or to receive direction or assistance.”

While in Mexico, the two envoys will meet with Mexican bishops, superiors of religious orders, and survivors who want to come forward. According to a statement released late on Monday, the Mexican bishops said they had requested that Scicluna and Bertomeu visit the country.

“It is a mission that seeks to benefit the smallest and most vulnerable by encouraging us as a Church, and specifically us as bishops, to continue guarding these brothers of ours,” the bishops wrote. “We trust that it will serve to improve the response to these cases, seeking the action of civil and canonical justice under the principle of ‘zero tolerance’ so that no case goes unpunished in our Church.”

They also write that for the Church to be able to contribute to the fight against “this scourge that is present in so many areas of society (family, school, work, among others), it must first commit itself effectively to its eradication within.”

Vatican spokesman Matteo Bruni said the mission was one of technical assistance to help the Mexican church “confirm the steps it has already taken in the right direction to provide a correct response to victims of sexual abuse.”

Last year, the president of the Mexican bishops’ conference admitted that 271 priests had been investigated in the last 10 years for sexual abuse. At a conference organized by CEPROME in November, Archbishop Rogelio Cabrera said that “we bishops need to acknowledge the mistakes of the past: We weren’t conscious of the seriousness of the issue, and the solutions we gave weren’t the right ones.”

However, some say the situation Scicluna and Bertomeu might find could be even worse what they found in Chile.

Sources on the ground have told Crux that many within the local hierarchy still don’t “get it,” and probably won’t for a long time. During that November conference, Cabrera said that every bishop who has served for more than ten years needs to come forward and acknowledge they have made mistakes when handing abuse allegations.

Several high-ranking Church officials who attended the conference told Crux that in Mexico, at least half of the local episcopate is guilty of at least mismanaging allegations if not actual criminal cover-up, which makes the implementation of Pope Francis’s new legislation, Vos estis lux mundi.

The May 9, 2019, law establishes new procedural norms to combat sexual abuse and to ensure that bishops and religious superiors are held accountable for their actions. It stipulates that when a bishop is accused of mishandling an abuse allegation, the metropolitan archbishop will investigate the accused bishop.

“It’s impossible to implement it in Mexico,” a Mexican priest recently told Crux. “How can you expect for bishops to police bishops when most have a skeleton in their closet?”

Scicluna knows the challenges, as it is not the first time he will have to look into a Mexican priest: As the top prosecutor for sexual abuse crimes in the Church under Pope emeritus Benedict XVI, he was tasked with investigating the late Father Marcial Maciel, the founder of the Legionaries of Christ, who was sentenced to a life of “prayer and penance” in 2006 after credible allegations the sexual abuse of minors were made against him.

Today, Scicluna serves as the archbishop of Malta and the adjunct secretary of the Congregation for the Doctrine of the Faith, which deals with allegations of the clerical abuse of minors. As of last week, Scicluna is also a member of a new Vatican anti-abuse task force.

Among the things the Vatican fact-finding mission will look into is an 18-page document of evidence against Bishop Felipe Padilla Cardona of Ciudad Obregón.

Cardona has been accused of cover up by an abuse survivor whose abuser was found guilty and removed from the priesthood by the Vatican in 2015.

Crux has reviewed the file, that includes allegations against over a dozen priests in the diocese. Some have already been removed from the clerical state, while others remain in their parishes.

The information was sent to the Vatican by Vincent Doyle, founder of Coping International Limited, an Ireland-based charity for children of priests.

Doyle told Crux that Coping had received the file from a “righteous Catholic priest who was concerned about safeguarding of minors and vulnerable adults and possible responses to safeguarding.”

“The document detailed alleged mishandling of cases of abuse in Mexico by authorities in the Catholic Church dating back years,” he said.

“I immediately reported my concerns to the police in Ireland who in turn informed Interpol (as per normal procedure) as Coping is an international mandatory reporting organization,” Doyle said. “I also informed the Holy See.”

According to Doyle, the priest in question was “understandably nervous” about his own safety for reporting church authorities and he subsequently made the Holy See aware of his fears.

“The Vatican responded to my highlighted concerns, allaying the priest’s fears, in writing: ‘with Vos estis lux mundi it is a crime to take action against those who denounce.  [The priest] has nothing to fear’.”

Consequently, Doyle said, he reported Cardona and another bishop to the CDF for alleged mishandling of reported abuse cases dating back years.

It is worth highlighting that Vox estis lux mundi is a procedural law that applies also to reporting misconduct in the past, making its application retroactive.

Mexican civil authorities recently began pressuring the local church, with lawmakers discussing several initiatives, including removing the statute of limitation for child abuse cases, and some have suggested the idea of creating an independent investigatory commission to look into clerical sex abuse in Mexico. 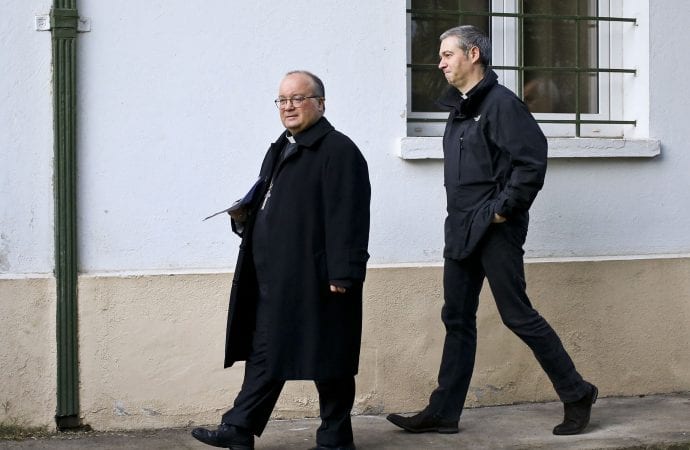