It was truly a day to remember for 44 people who had come to St Peter’s Square to be confirmed by the Pope. The special Mass on Sunday was organized as part of the Year of Faith and those who received the Sacrament of Confirmation had come from all over the world to be in the Square. During his homily Pope Francis began by recalling the second reading in Sunday’s liturgy which describes the vision of St John. Pope Francis explained that this Saint’s vision of new heavens and a new earth, and then the Holy City coming down from God, reminds us that all of us are journeying towards the heavenly Jerusalem, “the happy day when we will see the Lord’s face, and be with him forever, in his love.”
The Pope’s second reflection again focused on the liturgy, that being, the first reading from the Acts of the Apostles.Quoting from Paul and Barnabas who say that “we must undergo many trials if we are to enter the kingdom of God”, the Holy Father noted, “The journey of the Church, and our own personal journeys as Christians, are not always easy; they meet with difficulties and trials. But he added, that these obstacles are part of the path that leads to God’s glory, just as they were for Jesus, who was glorified on the cross; we will always encounter them in life!”, he said.
Turning to his final point Pope Francis invited the confirmands, and all those present in St Peter’s Square to “remain steadfast in the journey of faith, with firm hope in the Lord. This is the secret of our journey!”, he added. He gives us the courage to swim against the tide.

Following the Homily the 44 people being confirmed on Sunday, ranging in age from 11 to 55 who had come from Italy, Romania, Ireland and as far away as the United States and the Cape Verde Islands, made their way to the Pope, where he laid his hands on the head of each person, and anointed their foreheads with holy chrism in the form of a cross.Before the conclusion on this celebration the Holy Father recited the Regina Coeli and he entrusted those newly confirmed to the protection of Mary. He said that the Madonna would help them to be attentive to what the Lord asks of them and to live and walk always according to the Holy Spirit. 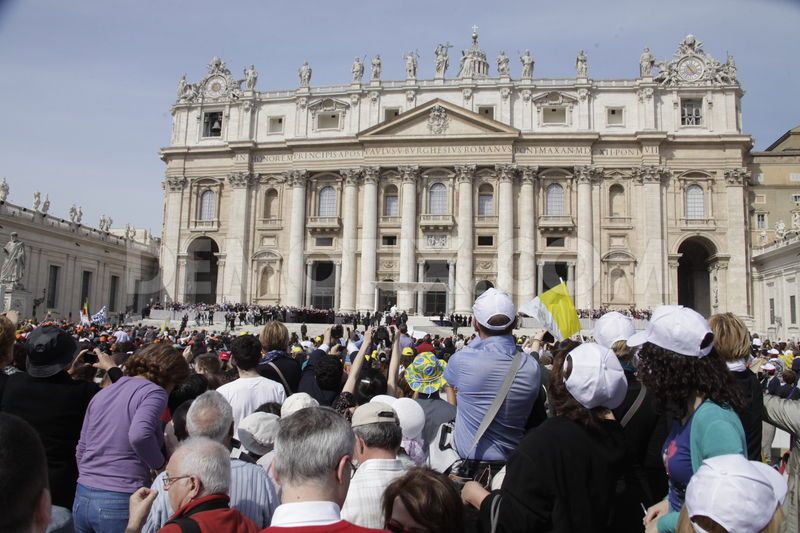