Pope Benedict XVI has met German victims of sexual abuse by priests, expressing “deep compassion and regret” at their suffering.

The Pope met five victims for half an hour, on the second day of his four-day state visit to his native Germany.

A statement from the Vatican said he was “moved and deeply shaken”.

The pontiff assured the victims that church officials were “seriously concerned” about dealing with crimes of abuse.

He also said the Church was “committed to the promotion of effective measures for the protection of children and young people”.

A Vatican spokesman said Pope Benedict met, “in calm circumstances”, two women and three men, who had come from different parts of Germany.

Church leaders said they hoped the Pope’s meeting with the victims would help revive faith in the Roman Catholic Church in Germany, which had been badly shaken by last year’s revelations of abuse.

Hundreds of people came forward to say they were abused as minors between the 1950s and 1980s, amid suspicions that the crimes were concealed.

There have now been allegations of abuse in 18 of Germany’s 27 Roman Catholic dioceses.

The top Catholic archbishop in Germany, Robert Zollitsch, admitted when the crisis broke that the institution had “failed” in its response.

The Pope has held similar meetings on trips to the United States, Australia, Malta and the UK.

All those countries have been affected by the sex abuse scandal that has plagued the Roman Catholic Church over the past decades.

The pontiff celebrated Mass with some 30,000 people early Saturday, unhindered by an incident on the edge of the security zone in which a man fired an air gun at a security guard about an hour before the service, Vatican and local officials said.

Benedict’s spokesman, the Rev. Federico Lombardi, told this site when contacted that there was “no worry” in the papal entourage over the incident, and the pontiff was not informed about it before the Mass. “It didn’t seem particularly urgent,” he told us on the phone. Police said the alleged shooter had been arrested and that there were no injuries.

Police later identified the suspect as a 30-year-old Erfurt man who lived in Berlin. They said an air rifle and air pistol were found in his top-floor apartment, and that he was being held on suspicion of attempting to cause serious bodily harm.

After the Mass, the pope flew to Freiburg, a city with a large Catholic population in southern Germany. 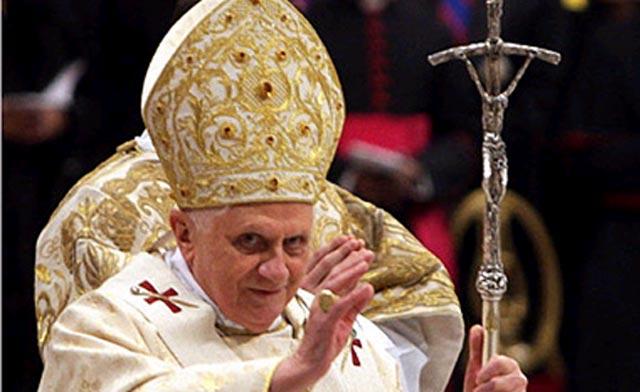