The Pontifical Council for Promotion of the New Evangelization presents the new Directory for Catechesis during a press conference held in the Vatican on Thursday.

Presenting the Directory, Archbishop Fisichella said the new edition, the third since the Second Vatican Council, is the result of a wide international consultation.

The new Directory for Catechesis was released in Italian on Thursday. It will be also published in other major languages.

Other speakers at the press conference included Archbishop Octavio Ruiz Arenas and Bishop Franz-Peter Tebartz-van Elst, Delegate for Catechesis and Secretary of the Pontifical Council for Promotion of the New Evangelization respectively.

Archbishop Fisichella notes that “the need for a new Directory was born of the process of inculturation which characterizes catechesis in a particular way and which, especially today, demands a special focus.”

He cites the example of the global phenomenon of the digital culture, pointing out that the instruments created in the last decade manifest a “radical transformation of behaviors” that influence “the formation of personal identity and interpersonal relations.” This new model of communication and formation “also affects the Church in the complex world of education.”

Theological and ecclesial reasons have also contributed to the preparation of the new Directory. Fisichella recalls that several recent synods have consistently treated the theme of evangelization and catechesis. Pope Francis also picked up the theme in his Apostolic Exhortation Evangelii gaudium during the twenty-fifth anniversary of the publication of the Catechism of the Catholic Church.

“Catechesis, therefore, must be united intimately with the work of evangelization and cannot be separated from it,” Fisichella affirms. This is because “Evangelization is the task that the Risen Lord has entrusted His Church in order to be, in the time of every age, the faithful announcement of his Gospel.”

“The heart of catechesis is the proclamation of the person of Jesus Christ,” Fisichella said. Jesus “surpasses the limits of space and time to present Himself to each generation as the good news offered to reach the meaning of life,” he added.

Fisichella points out that in light of Evangelii gaudium, the Directory supports a “kerygmatic catechesis” because “primacybelongs to evangelization, not to catechesis.”

Fisichella explains that the Directory unfolds by touching on various themes.

The first — mystagogy­ — is presented through two elements: a renewed appraisal of the liturgical signs of Christian initiation, and the progressive maturation of the formation process, which involves the whole community.

Another theme is the link between evangelization and the catechumenate. This highlights the urgency of a “pastoral conversion” to free catechesis from elements that prevent its effectiveness.

Reiterating Pope Francis’s words in Evangelii gaudium, when he encouraged formation using in the “way of beauty” (via pulchritudinis), Fisichella points out that the Directory “has placed the way of beauty as one of the ‘sources’ of catechesis.”

The Archbishop also highlights that the Directory strives to “insert us progressively into the mystery of the faith.” He points out that this characteristic cannot be limited to a single dimension; rather catechesis can guide us to accept and live the mystery “completely in our daily existence.”

In his intervention, Bishop Franz-Peter Tebartz-van Elst said that the Directory is attentive to the signs of the times and interprets them in the light of the Gospel. He pointed out that it gives courage to the content of faith and underlines the importance of catechesis in the wider process of evangelization. He also hopes that many local churches would be inspired to develop their own diocesan directories based on this new Directory.

Concluding, Archbishop Fisichella said he hopes the new Directory will be of assistance for the “renewal of catechesis in the process of evangelization that the Church has not tired of carrying out.” 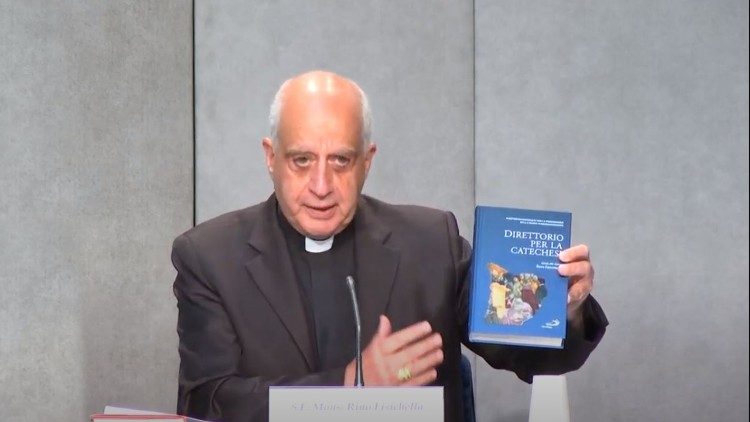