In the parable in today’s Gospel reading, that of the merciful King (see Mt 18:21-35), twice we find this plea: “Be patient with me, and I will pay you back in full” (vv. 26, 29). The first time it is pronounced by the servant who owes his master ten thousand talents, an enormous sum. Today it would be millions and millions of dollars. The second time it is repeated by another servant of the same master. He too is in debt, not towards the master, but towards the same servant who has that enormous debt. And his debt is very small, maybe a week’s wages.

The heart of the parable is the indulgence the master shows towards his servant with the bigger debt. The evangelist underlines that, “moved with compassion the master”- we should never forget this word of Jesus: “Have compassion”, Jesus always had commission – “moved with compassion the masterlet him go and forgave him the loan” (v. 27). An enormous debt, therefore a huge remission! But that servant, immediately afterwards, showed himself to be pitiless towards his companion, who owed him a modest sum. He does not listen to him, he is extremely hostile against him and has him thrown in prison until he has paid his debt (see v. 30). The master hears about this and, outraged, calls the wicked servant back and has him condemned (see vv. 32-34). “I forgave you a great deal and you are not capable of forgiving so little?”

In the parable we find two different attitudes: God’s – represented by the king who forgives a lot, because God always forgives – and the human person’s. The divine attitude is justice pervaded with mercy, whereas the human attitude is limited to justice. Jesus exhorts us to open ourselves with courage to the strength of forgiveness, because in life not everything can be resolved with justice. We know this. There is a need for that merciful love, which is also at the basis of the Lord’s answer to Peter’s question, which precedes the parable. Peter’s question goes like this: “Lord, if my brother sins against me, how often must I forgive him?” (v. 21). And Jesus replies, “I say to you, not seven times but seventy-seven times” (v. 22). In the symbolic language of the Bible this means that we are called to forgive always.

How much suffering, how many wounds, how many wars could be avoided if forgiveness and mercy were our lifestyle!  Even in families, even in families. How many families are disunited, who do not know how to forgive each other. How many brothers and sisters bear resentment within. It is necessary to apply merciful love to all human relationships: between spouses, between parents and children, within our communities, in the Church and also in society and politics.

Today as we were celebrating the Mass, I paused, touched by a phrase in the first reading from the book of Sirach. The phrase says, remember your end and stop hating. A beautiful phrase. But think of the end. Just think, you will be in a coffin… and will youtake your hatred there? Think that in the end you can stop hating and resenting. Let’s think of this phrase that is very touching. Remember your end and stop hating.

It is not easy to forgive because although in moments of calm we think “Yes, this person has done so many things to me but I have done many too. Better to forgive so as to be forgiven”, but then resentment returns like a bothersome fly in the summer that keeps coming back. Forgiveness isn’t something we do in a moment, it is a something continuous, against that resentment, that hatred that keeps coming back. Let’s think of our end and stop hating.

Today’s parable helps us to grasp fully the meaning of that phrase we recite in the Lord’s Prayer: “And forgive us our trespasses, as we forgive those who trespass against us” (see Mt 6:12). These words contain a decisive truth. We cannot demand God’s forgiveness for ourselves if we in turn do not grant forgiveness to our neighbour. It is a condition. Think of your end, of God’s forgiveness, and stop hating. Reject resentment, thatbothersome fly that keeps coming back. If we do not strive to forgive and to love, we will not be forgiven and loved either.

Let us entrust ourselves to the maternal intercession of the Mother of God: May she help us to realise how much we are in debt to God, and to remember that always, so that our hearts may be open to mercy and goodness.

In recent days, a series of fires have devastated the refugee camp of Moria on the Island of Lesbos, leaving thousands of people without a shelter, even a precarious one.  I still remember my visit there and the appeal I launched together with the Ecumenical Patriarch Bartholomew and Archbishop Ieronymos of Athens, to “do our part towards giving migrants, refugees and asylum seekers a humane and dignified welcome in Europe” (16 April 2016). I express my solidarity and closeness to all the victims of these dramatic events.

In addition, in these weeks we are witnessing numerous popular protests all over the world – in many parts – expressing the growing unease of civil society in the face of particularly critical political and social situations. While I urge the demonstrators to present their demands peacefully, without giving in to the temptation of aggression and violence, I appeal to all those with public and governmental responsibilities to listen to the voice of their fellow citizens and to meet their just aspirations, ensuring full respect for human rights and civil liberties. Finally, I invite the ecclesial communities living in such contexts, under the guidance of their Pastors, to work for dialogue, always in favour of dialogue, and in favour of reconciliation – we have talked about forgiveness, reconciliation.

Due to the pandemic, this year the traditional Collection for the Holy Land has been moved from Good Friday to today, the eve of the Feast of the Exaltation of the Holy Cross. In today’s context, this Collection is an even greater sign of hope and solidarity with the Christians living in the land where God became flesh and died and rose again for us. Today we make a spiritual pilgrimage, in spirit, in our imagination, with the heart, to Jerusalem, where, as the Psalm says, are our sources (cf. Ps 87:7), and we make a gesture of generosity towards those communities.

I greet you all, Roman faithful and pilgrims from various countries. In particular, I greet the cyclists suffering from Parkinson’s disease who have travelled the Via Francigena from Pavia to Rome. You have been fast! Thank you for your witness. I greet the Madonna Addolorata Confraternity of Monte Castello di Vibio. I see that there is also a Laudato si’ Community: thank you for what you do; and thank you for the meeting yesterday here, with Carlìn Petrini and all the leaders who are going forward in this struggle for the protection of creation.

I greet all of you, all of you, especially the Italian families who in August dedicated themselves to the hospitality of pilgrims. They are many of them! I wish you all a good Sunday. Please do not forget to pray for me. Have a good lunch and arrivederci! 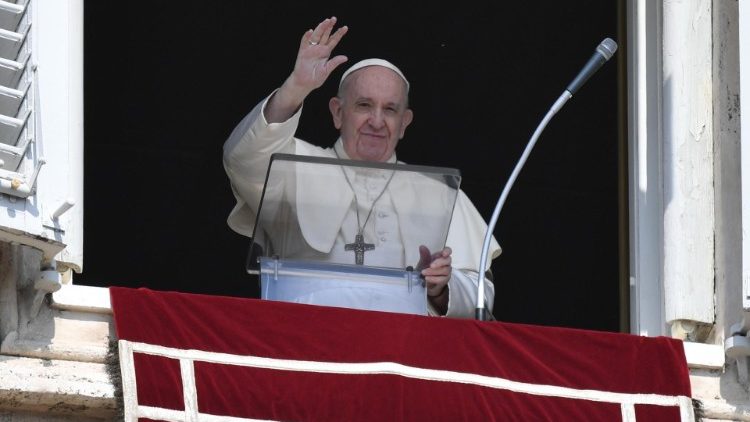