As the threat of Russian troops invading Ukraine continues to rise, Catholics around the world are joining in prayer for peace in the Eastern European country on Wednesday. The special day of prayer was called for by Pope Francis after his Angelus address on 23 January.

Heeding the Pope’s appeal, the Major Archbishop of the Ukrainian Greek Catholic Church, Sviatoslav Shevchuk, is leading a prayer marathon in which every Greek Catholic archeparchy and eparchy across the world is taking part.

The live-streamed prayer marathon began at 9 AM Kyiv time, and will last 12 hours, covering all the Ukrainian Catholic Dioceses throughout the globe – from Ukraine to Australia, South America, North America, Western Europe, Central Europe, and as far away as Kazakhstan.

Appeals from the US and Canada

The Ukrainian Catholic bishops in countries of the diaspora have also called for financial support to help those affected by Ukraine’s ongoing humanitarian crisis.

“People near the front line often lack the basics — clean water, food, clothes, medicine,” said a statement released on 22 January by the Greek Catholic Bishops in the United States. “The war in Ukraine is real. It kills, maims and destroys daily. An escalated Russian invasion will generate additional millions of refugees, more dead and injured, more tears and pain”, the bishops added, also asking the faithful to be informed and inform others of the situation in the country.

“The world cannot look away; you should not look away. Seek and share the truth, which gives authentic freedom and wisdom,” they said. A similar call was made on Sunday by the Greek Catholic Bishops in Canada, home to a sizable Ukrainian community.

UK Catholics encouraged to pray for peace in Ukraine

In England, Bishop Kenneth Nowakowski, of the Ukrainian Catholic Eparchy of the Holy Family of London, has emphasized the importance of prayer in the present crisis. Speaking through the media office of the Bishops’ Conference of England and Wales (CBCEW), he invited all people of goodwill to join in a prayer service to be held Wednesday in the Cathedral of the Holy Family.

Bishop Nowakowski further called on Catholics, Christians, and all UK citizens, as well as the Ukrainian community in Britain, to unite in supporting peace. “Let’s understand that we have a common home; that more unites us than divides us,” the bishop said.

The World Council of Churches (WCC) has also joined in calling for a peaceful solution to the crisis.

“As we follow the news of the mad progression towards war, we plead for a different logic than one based on geopolitical competition,” said Rev. Ioan Sauca, Acting General Secretary of WCC in a statement. “We pray for a change of hearts and minds, for de-escalation, and for dialogue instead of threats.”

“God’s people – and members of the ecumenical fellowship – find themselves on both sides of the current confrontation,” added Rev. Sauca. “But our God is a God of peace, not of war and bloodshed. Though the things that make for peace may be hidden from the eyes of those driving the march to war, we pray that they may yet be opened and that peace may yet prevail.” 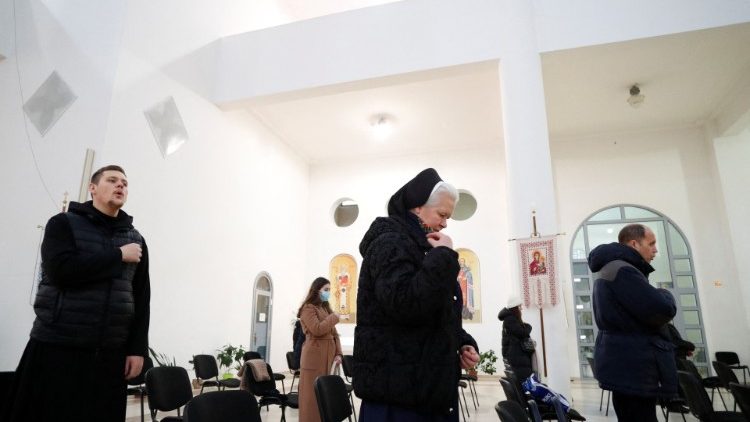