What would you do if you were told you were pregnant with a child with two heads and extra limbs? What if the doctors told you that you should have an abortion because such a difficult pregnancy could put you in danger?

Rosa Silva faced this situation in Chile in 1984; she decided to reject abortion and accept “whatever God sends me.” The diocese of Valparaíso, Chile, owes two of its priests to that decision — twin brothers Fr Paulo and Fr Felipe Lizama.

The twins’ unusual story made the news in 2013, the year after they were ordained, and was covered by articles in Catholic news outlets Aciprensa and Religión en Libertad (ReL), among other websites. Today, eight years into their priesthood, they are enthusiastic about their ministry and are using social media to evangelize.

Their parents, Rosa and Humberto, couldn’t have imagined 36 years ago that today they’d have identical twin priest sons live-streaming Mass on Facebook. When Rosa went in for a checkup after learning she was pregnant, the doctor performed an ultrasound and thought that what they were seeing on the screen was a gravely deformed child (by the description, probably inviable conjoined twins), a pregnancy that could put Rosa’s life at risk. The doctor recommended a “therapeutic” abortion as the solution.

“They told my mother to have an abortion … but she didn’t want to. She chose life even though at that time she could have [had an abortion], because she was supposedly at risk,” Paulo told ReL. (“Therapeutic” abortion was legal in Chile at the time; it was made illegal in 1989, but was legalized again in 2017.)

Fr Felipe told Aciprensa that they’re not sure if the doctor misinterpreted the ultrasound, or if the Lord intervened in the pregnancy so that healthy twins would be born. Whatever the case, Fr Paulo says, “I always feel special affection and tenderness when I think of the heart of my mother, who was willing to give her life for me; for us.”

The twins were born healthy on September 10, 1984, 17 minutes apart (Felipe is the older of the two). They also have a sister, Paola, who is 4 years older.

The road from birth to the priesthood wasn’t exactly straight and easy. Although both Felipe and Paulo grew up as practicing Catholics, for a time their enthusiasm for playing soccer got in the way of their Sunday Mass attendance. Then, when the boys were 14 years old, their parents separated, and Felipe and Paulo started to spend more time involved with the Church; there wasn’t much else to do in their town, they told ReL.

By the time they were 16 years old, they had stopped playing soccer and were more involved in the Church than ever (although even today they continue to be energetic fans of the sport). They entered the seminary at the age of 18.

One might think that joining the priesthood was a decision they would have discerned together; twins have a reputation for sharing all their secrets. However, they say that they both kept their vocational discernment private, because they didn’t want to influence each other’s life decisions. Each was attracted to the priesthood  in his own way, although the final result was the same. Paulo told Aciprensa, “I don’t know which of the two of us felt the call first. I think God did things very well, to protect the freedom of our response.” Fr Paulo, on the day they were ordained, said, “We share the same experiences and the same call from Jesus to share Him with others.”

Speaking about the vocation to the priesthood, Fr Felipe tells Aciprensa, “God doesn’t play with us. He wants us to be happy, and the priesthood is a beautiful vocation that makes us fully happy.”

Fr Pablo says, “Jesus, the Church and the World need us. But they don’t need just any young many: they need young men empowered by the truth of God, in such a way that their very life radiates life, their smile shows hope, their gaze shows faith, and their actions show love.”

The twins only learned the story of their mother’s courage during her pregnancy with them when they were in the sixth year of their seminary studies. They see those early events as providential: God had called them from all eternity, and their mother’s love and generosity made it possible, they told Aciprensa. Fr. Paulo said, “How can we not defend life? How can we not preach the God of life? This event gave an impulse to my vocation, it gave it a specific vitality … I’m convinced of what I believe in, of what I am and of what I speak, clearly by God’s grace.”

After 10 years of study and preparation, they were ordained priests together on April 28, 2012, in the cathedral of Valparaíso.

Fr Paulo says that even as priests they still play the kind of jokes typical of twins. “People confuse us and I often pretend to be my brother. The funniest thing is the way people react. It’s the naughtiness of twins, a ‘plus’ that we can’t not take advantage of.” He says that most people don’t notice that one of them is left-handed and the other is right-handed.

Today, social media is part of their ministry. Their posts on Facebook, Instagram, and Twitter reflect their joy in their priesthood, their sense of humor, their closeness to each other and to their family, and their love of soccer.

God’s ways are not ours. Rosa and Humberto Lizama were faced with a difficult decision where they could have chosen an apparently easier path that would have gone against God’s law (abortion), but instead they chose to trust in God and respect and welcome life, however “wounded” that life might have been. In this case, God wanted to bless that fidelity with a gift for the parents and for the Church. May they and we receive the grace and strength to understand and make the right choices consistently; God will, beyond a doubt, consistently bless us, even though we won’t always see it at the time. 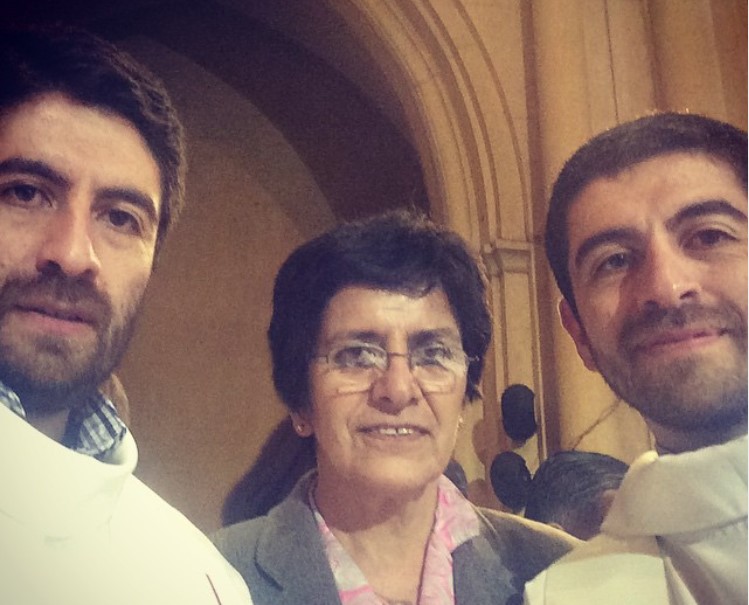