Tens of thousands of people filled St Peter’s Square today in a massive show of solidarity with Pope Benedict XVI over the clerical sex abuse scandal.

Benedict said he was comforted by such a “beautiful and spontaneous show of faith and solidarity” and again denounced what he called the “sin” that has infected the church and needs to be purified.

An association of 68 Italian lay groups organised the demonstration, which despite a drizzling rain overflowed out of the piazza with balloon- and banner-toting faithful from around Italy.

Such large crowds are usually reserved for major holiday Masses and canonisations, not for Benedict’s brief weekly prayers from his studio window. The crowd interrupted Benedict frequently with applause and shouts of «Benedetto!” and Benedict himself strayed from his prepared remarks to thank them again and again.

“Thank you for your presence and trust,” he said. “All of Italy is here.”

Benedict didn’t refer explicitly to the scandal, but repeated his recently stated position that the scandal was born of sins within the church, which must be purified.

“The true enemy to fear and to fight against is sin, the spiritual evil that unfortunately sometimes infects even members of the church,” he said.

The Vatican has been mired in scandal amid hundreds of reports in Europe, the US and elsewhere of priests who raped and molested children while bishops and Vatican officials turned a blind eye. Benedict’s own handling of cases has also come under fire. 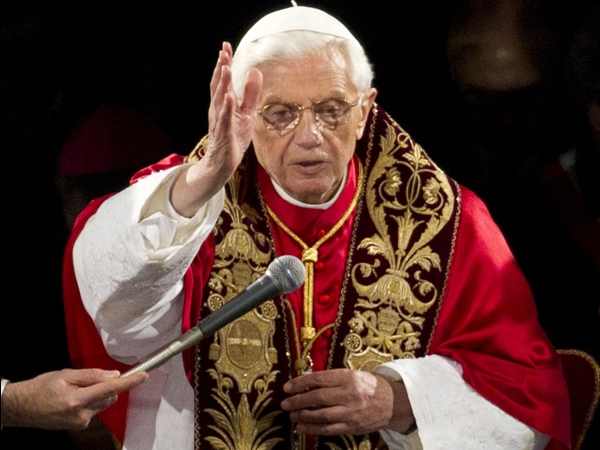