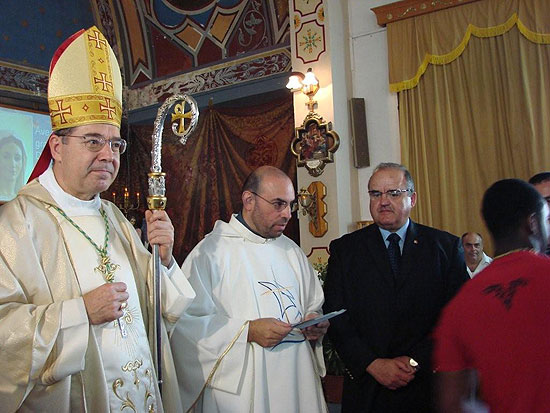 As soon as it was announced that Pope Benedict XVI was going to visit Malta, the first thought that came into the prisoners’ heads was “could it be that this time, our dream will be realized? Will the Pope have enough time to visit us in the same way as other Popes did and just as  Pope John XXIII did when he visited the Regina Coeli prison in Rome, more than 50 years ago?  I must admit that even I was filled with hope and expectation at the idea of Pope Benedict visiting the Corrective Facility at Kordin.  Yet, from the outset, it seemed unlikely that this dream would materialize, since the programme for the papal visit was spread only over 26 hours and besides, it will full to capacity.  In spite of this, the prisoners did not wish to miss the opportunity to make their voices heard.  They too wished to show the Pope that, like the majority of the Maltese people, they were appreciative of his visit to our country.  In this respect, they thought of writing a letter and sending it to the Pope, through Fr Savio Vella SDB, who was the coordinator of the meeting which Pope Benedict had with youths at the Valletta Waterfront.  The letter was penned by the prisoners who form part of the section known as YOURS, ie the section where youths are housed.  The letter reads as follows:

Welcome to our Island, on behalf of all inmates at Corradino Correctional Facility.  May your visit to Malta, for which we would like to express our gratitude, renew and strengthen our island’s Christian Faith, brought to us by St.Paul our patron saint.

People sometimes think that, because God is God, he cannot understand huma faults and weakness.  That is exactly why he sent us his son Jesus Christ.  By becoming man he became one with our weakness, he shared our experiences and he felt everything we will ever feel, even though he was without sin.  These distortions form the prison that houses the real self. Satan has always tried to make us believe his lies, in order to make us stray from the path of righteousness, through these distortions.  We need to challenge these lies, and see where they come from, rebuking them in the name of Jesus almighty.

All of these distortions where learned in the context of relationships and it is in this context that they need to be healed.  We internalize how we are treated, and we must free ourselves from our old ways of relating and open ourselves up to God’s way.  Again, as in the other stages, this is not done without risk and pain.  However real healing and spiritual power can be found through the sacrament of confession and safe relationships where the darkness can be made light and we can find forgiveness and acceptance for our misgivings.

May we learn from our mistakes but no longer carry the burden of our sins.  May we look to the future with hope rather then despair and may we fully appreciate the now, the present moment.  May we remember that time is a gift and that is why it is called the ‘present’.  Help us to be of service to others providing inner freedom even within the walls of prison.

Your Holiness pray for us and for our families who worry about us, suffer with us and support us through these hard times.  Pray for the guards and management who care for us.  We should especially like to pray for those people we might have hut.  May they have the strength to forgive us and learn to trust again.  Finally pray for our multi ethnic prison.  May we learn to live as one family treating one another with love and respect as ou Heavenly Father intended.

The residents at the Young Offenders Unit of Rehabilitation Service (YOURS).

This letter was handed to Fr Savio, who in turn ensured that it reached the Pope.  On 17th and 18th April the Pope honoured us with his presence.  During the meeting with youths on Sunday 18th April, there were present some inmates from YOURS, as well as other prisoners who are following a drug rehabilitation programme at SATU (Substance abuse therapeutic unit), which is an extension of the prison.  One of the youths from YOURS was invited to address the Pope from the podium. He spoke in the name of all those youths who feel that they are on the periferies of the Church – homosexuals, those who take drugs, etc.  The youth expressed how, after he finished his address, he was moved not only by the Pope’s penetrating look which left an indelible mark upon his heart, but also by his sincere embrace.

The visit ended and two days later, our Archbishop, his Excellency Paul Cremona OP asked to see me at his residence in Attard. To my surprise, he handed me a letter from the Pope, which was a response to the letter which the prisoners had sent him.  The letter, which is signed by the Pope himself, reads:

I have received the message that you sent me and I would like to convey to you my deep appreciation for the sentiments that you expressed and for the support of your prayers.

During this visit to the Maltese Islands, I come as a Pastor to greet all the people in the name of the Lord.  Be assured that I shall be especially mindful of those who suffer in any way – the sick, the elderly, the housebound, and those like yourselves who are in prison.  I pray that you will draw comfort from the knowledge that you share in the condition of Saint Paul himself, who. Although a prisoner, had the inner freedom to ‘rejoice in the Lord’ (Phil 4:10), knowing that ‘neither, nor life, nor angels, nor principalitism nor things to present, nor things to come. Nor powers, nor height, nor depth, nor anything else in all creation, will be able to separate us from the love of God in Christ Jesus our Lord” (Rom 8:38-39).

With these sentiments, I assure you of my spiritual closeness.  Invoking upon you and your loved ones the intercession of Saint Paul, Apostle of Malta, I cordially impart my Apostolic Blessing as a pledge of strength and peace in the Lord.

I welcomed these words with great joy since they are witness that the Church, through the person of the Pope, is very close to those who are suffering.  It was decided to invite the Apostolic Nuncio, in the name of the Pope, to present this letter to the prisoners, during a celebration which was to be organized for this specific purpose.  In fact, the Nuncio willingly accepted our invitation and on Saturday 12th June, he celebrated mass in the chapel of the Corrective Facility of Kordin. A large number of prisoners and prison officials attended, together with the Prison Director, Abraham Zammit.  The atmosphere was extremely cordial and welcoming.

On his arrival, the Nuncio was greeted by the prison officials and a parade was held.  Afterwards, a meeting was held with the Acting Director in his office.  The celebration of the mass followed, during which some of the prisoners who were present for the Pope’s visit with youths, shared their experiences.  There were also prayers in several languages from prisoners representing various countries from which they hail.  After mass, the Apostolic Nuncio addressed the prisoners.  He made it very clear that the Church lovingly embraces them as her children.  He encouraged them to use the time which they spend in prison in profound reflection upon the beauty of life, the dignity which is inherent in every person and upon the beautiful qualities which they possess and how these can be brought to bear upon others for the benefit of society.  He also urged them to seek solace in the Virgin Mary (we were actually celebrating the feast of the Sacred Heart of Mary) and to trust her unconditionally because she is our Mother, who understands our deepest desires and draws us closer to her son, Jesus.

Finally, the Nuncio read out the Pope’s letter, and presented it to the Prison Chaplain, amid much clapping. At the end of the mass, In the name of all those present, I thanked the Nuncio and asked him to pass on a message of gratitude to the Pope, at the same time, entreating him to keep all the prisoners, their families and their victims in his prayers.  I also expressed the desire on behalf of all the people at the Corrective Facility that we may have the opportunity to welcome the Pope among us in the future.  The letter, which the prisoners wrote, as well as the Pope’s response, have been suitably displayed in the Prison chapel, so that they may serve as a timely memento of this unforgettable event.

Before leaving, His Excellency Mons Caputo shook hands with all those present.  He also inaugurated and blessed a monument, situated in the courtyard, that has been erected in honour of prison officials who have served at Kordin and are now deceased.  In his address, Acting Director Abraham Zammit reminded all the officials who serve at the Corrective Facility about their commitment towards reforming the residents.  He added that in spite of the demanding nature of their job, the officials should be proud to be able to offer this service to society. 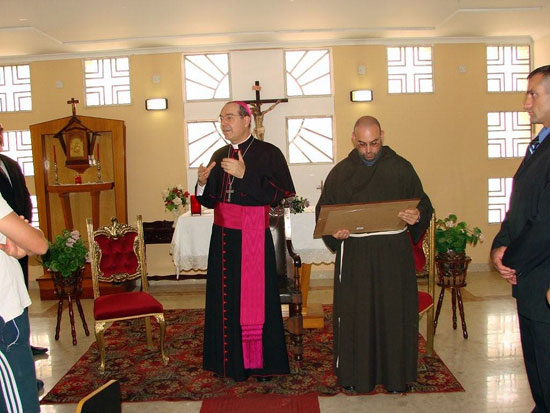