Pope Benedict XVI today issued his Message for World Mission Sunday, to be celebrated in October of this year. The theme of this year’s Message is taken from the Motu proprio, Porta fidei with which Pope Benedict XVI proclaimed the Year of Faith: “called to radiate the word of truth that the Lord Jesus has left us.” The Pope’s Message is divided into four parts, preceded by an introduction that places this year’s World Mission Sunday in the context of the 50th anniversary of the II Vatican Council, the Conciliar declaration Ad gentes, the Year of Faith and the Synod assembly on the New Evangelization.

Separated by headings, the four parts of the message are dedicated to: missionary ecclesiology; the priority of evangelizing; faith and proclamation; proclamation that becomes charity. Concluding his Message, Pope Benedict XVI invokes the outpouring of the Holy Spirit on the work of evangelization ad gentes, and particularly on those who dedicate their labour to its cause, so that – by the grace of God – the work of evangelization ad gentes might ever more decisively make its way in the world and in human history.

In the words of Blessed John Henry Newman, Pope Benedict prays, “Accompany us, O Lord, your missionaries to evangelize in the land, put the right words on their lips, make their efforts fruitful,” and implores the intercession of Mary, Mother of the Church and Star of Evangelization, that she might accompany all the missionaries of the Gospel. 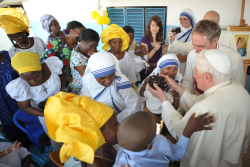