On the second day of his Apostolic Journey to Iraq, Pope Francis traveled to Ur of the Chaldeans, the birthplace of the three major religions—Islam, Christianity, and Judaism.

His meeting there was billed as the highpoint of his efforts to promote interreligious dialogue and fraternity in the Middle Eastern nation.

“This blessed place brings us back to our origins, to the sources of God’s work, to the birth of our religions,” the Pope said in his speech to representatives of the three Abrahamic religions.

Returning to Ur, the birthplace of Abraham, “we seem to have returned home,” added the Pope. He was speaking at a venue set up next to what tradition holds was Abraham’s house, near the Great Ziggurat of Ur.

“It was here that Abraham heard God’s call; it was from here that he set out on a journey that would change history. We are the fruits of that call and that journey.”

The Pope went on to note that God asked Abraham to count the stars and promised the patriarch that his descendants would be as numerous. “He saw us.”

As representatives of those descendants gathered in his birthplace, the Pope urged everyone to look up to heaven as we journey upon earth.

‘We look up to heaven’

Pope Francis reflected first on the lessons we can learn from stargazing.

He said those same stars which our father Abraham looked upon still illumine our darkest nights “because they shine together.”

“Heaven thus imparts a message of unity,” said the Pope, “the Almighty above invites us never to separate ourselves from our neighbours. The otherness of God points us towards others, towards our brothers and sisters.”

The Holy Father also urged the faithful of all religions to preserve fraternity through love while lifting our eyes toward heaven and worshiping God.

“This is true religiosity: to worship God and to love our neighbour,” he said. “In today’s world, which often forgets or presents distorted images of the Most High, believers are called to bear witness to his goodness, to show his paternity through our fraternity.”

The Pope then recalled that “God is merciful” and that the greatest blasphemy is “to profane His name by hating our brothers and sisters.”

He said believers cannot be silent when terrorism abuses religion, since violence and extremism are not born of a religious heart.

Lamenting the “dark clouds of terrorism, war, and violence” that have overshadowed Iraq, Pope Francis recalled that “all ethnic and religious communities have suffered.” He especially lifted his voice in defense of the Yazidi community, many of whom have been murdered, sold as slaves and forced to convert.

And the Pope prayed for those who have fled Iraq or been abducted, asking God that “they may soon return home.”

“Let us pray that freedom of conscience and freedom of religion will everywhere be recognized and respected; these are fundamental rights, because they make us free to contemplate the heaven for which we were created.”

Pope Francis went on to recall the destruction and death wreaked by the so-called Islamic State in the north of Iraq.

Despite the devastation, “some stars kept shining”, he said, pointing to the many examples of joint efforts to rebuild churches and mosques.

As these places of worship are rebuilt, he urged everyone to make pilgrimages to holy places, “for it is the most beautiful sign on earth of our yearning for heaven.”

He recalled that Abraham build altars to the Lord in various places, and prayed that all might find in the patriarch the inspiration to make our houses of worship “oases of peace and encounter for all.”

“By his fidelity to God, Abraham became a blessing for all peoples,” said the Pope. “May our presence here today, in his footsteps, be a sign of blessing and hope for Iraq, for the Middle East and for the whole world. Heaven has not grown weary of the earth: God loves every people, every one of his daughters and sons!”

Journey together on earth

The Pope then considered Abraham’s example of journeying in this world while keeping his eyes fixed on heaven.

“For Abraham, looking up to heaven, rather than being a distraction, was an incentive to journey on earth, to set out on a path that, through his descendants, would lead to every time and place.”

The patriarch’s journey involved sacrifices, said Pope Francis, yet reminds us that “we need one another.”

“On our own journey, we are called to leave behind those ties and attachments that, by keeping us enclosed in our own groups, prevent us from welcoming God’s boundless love and from seeing others as our brothers and sisters.”

Pope Francis said our stargazing also pushes us along “the way of peace.”

The Covid-19 pandemic, he noted, has shown us that no one can ignore the suffering of others, especially the most vulnerable.

Peace, he added, requires alliances that do not pit us against them, but ones that unite us by overcoming division.

The Pope added that hatred is the true enemy. “Anyone with the courage to look at the stars, anyone who believes in God, has no enemies to fight,” he said. “He or she has only one enemy to face, an enemy that stands at the door of the heart and knocks to enter. That enemy is hatred.”

Finally, Pope Francis encouraged the faithful of the three Abrahamic religions to find inspiration in our common father, and turn our weapons into instruments of peace.

“It is up to us to remind the world that human life has value for what it is and not for what it has. That the lives of the unborn, the elderly, migrants and men and women, whatever the colour of their skin or their nationality, are always sacred and count as much as the lives of everyone else!”

Abraham’s journey, he concluded, was a “blessing of peace.” In our own day, our journey toward peace requires concrete steps of fraternity, working together to achieve something good.

“Brothers and sisters of different religions, here we find ourselves at home, and from here, together, we wish to commit ourselves to fulfil God’s dream that the human family may become hospitable and welcoming to all his children; that looking up to the same heaven, it will journey in peace on the same earth.” 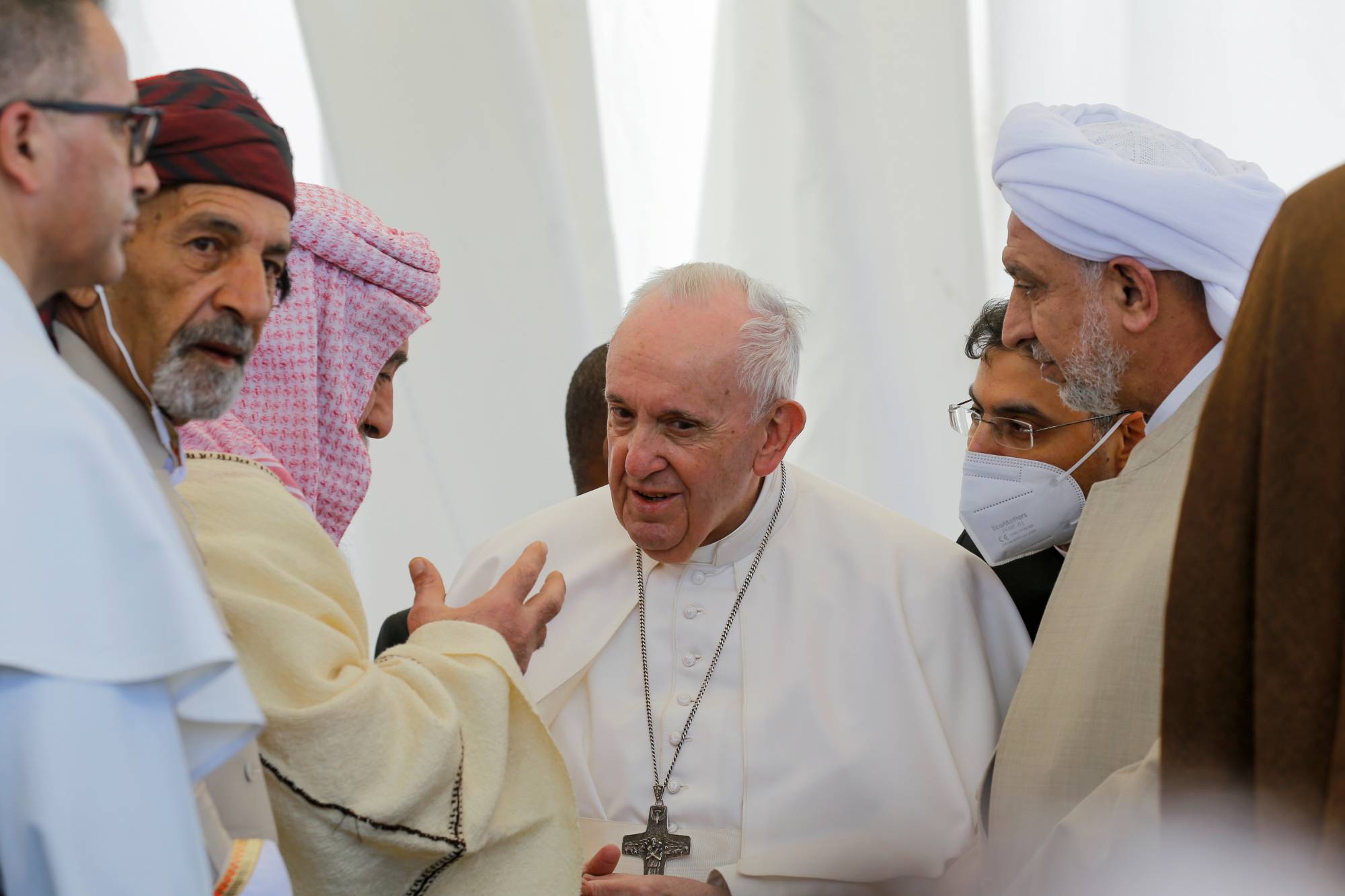