The Pope on Sunday visited the Reception and Identification Centre of Mytilene on the island of Lesbos. While there, he heard the testimonies of migrants, and told those present migration is a humanitarian crisis that concerns everyone.

Five years ago, Pope Francis came to the island of Lesbos to see for himself the plight of migrants here. On Sunday, as part of his Apostolic Visit to Greece, he was greeted by thousands of migrants at the Mytilene camp onthis island, telling them “I am here to see your faces and look into your eyes.”

Quoting Ecumenical Patriarch Bartholomew, he said, “those who are afraid of you have not looked you in the eye…  They have forgotten that migration is not an issue for the Middle East and Northern Africa, for Europe and Greece.  It is an issue for the world.”

Pope Francis underlined that migration is a “humanitarian crisis that concerns everyone.” He noted that while strides are being made to deal with the COVID-19 pandemic and climate change, “all this seems to be terribly absent when it comes to migration.”

“It is an illusion to think it is enough to keep ourselves safe, to defend ourselves from those in greater need who knock at our door”, Pope Francis said.  “In the future, we will have more and more contact with others.  To turn it to the good, what is needed are not unilateral actions but wide-ranging policies.”  History, he added,  “teaches this lesson, yet we have not learned it.”

During his address, the Pope asked every man and woman, “to overcome the paralysis of fear, the indifference that kills, the cynical disregard that nonchalantly condemns to death those on the fringes.”

Pope Francis highlighted that since his visit five years ago, little has changed with regard to the issue of migration. However, he praised those who have committed themselves to the work of welcoming and integrating migrants.

It is with deep regret, he continued,  “we must admit that this country, like others, continues to be hard-pressed, and that in Europe there are those who persist in treating the problem as a matter that does not concern them.”

“It is distressing to hear of proposals that common funds be used to build walls as a solution,” he said.

“Yet problems are not resolved and coexistence improved by building walls higher, but by joining forces to care for others.”

“Rather than bickering over ideas,” said the Pope,  it would be better to “broaden our gaze to take in the problems of the majority of humanity, of all those peoples who are victims of humanitarian emergencies they did not create, yet have to endure as the latest chapter in a long history of exploitation.”

“It is easy to stir up public opinion by instilling fear of others,” noted Pope Francis,  yet why do we fail to speak with equal vehemence about the exploitation of the poor, about seldom-mentioned but often well-financed wars… about covert deals to traffic in arms, favouring the proliferation of the arms trade?

He stressed that the remote causes should be attacked, “not the poor people who pay the consequences and are even used for political propaganda.”

“To remove the root causes”, he added “more is needed than merely patching up emergency situations.  Coordinated actions are needed.” 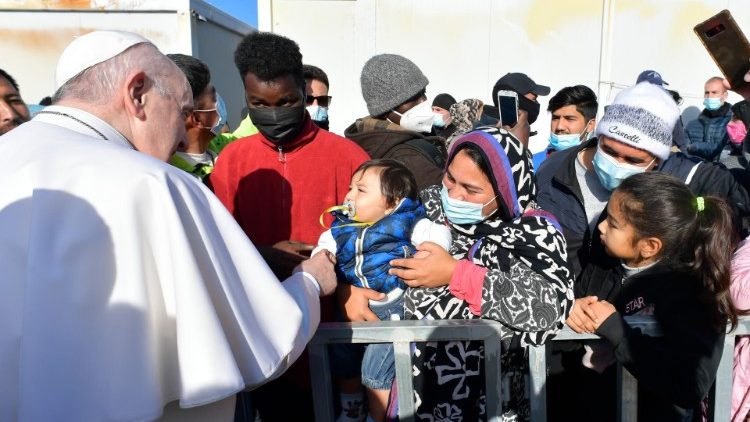