At the centre of Pope Francis’ catechesis on prayer at his General Audience on Wednesday was the figure of Abraham.

The Pope explained that with this “father in faith”, we see a new way of relating to God.

Abraham, recounted Pope Francis, hears a voice that resonates in his life. It’s the “voice that encourages him to uproot himself from his homeland, from the roots of his family,  to move towards a new, different future.”

The Pontiff underlined that Abraham does this on the basis of trust and the promise “that his lineage will be as numerous as the stars that dot the sky.”

With this trust, said the Pope, comes a new way of conceiving our relationship with God. “It is for this reason that the patriarch Abraham is present in the great Jewish, Christian and Islamic spiritual traditions as the perfect man of God, capable of submitting to Him, even when His will is difficult, if not even incomprehensible.”

From that point on, noted Pope Francis, the life of believers has been seen in terms of vocation, a personal call to live one’s life in fulfillment of God’s promises.

God as companion and guide

During his catechesis, the Pope described how, in the Book of Genesis, we see Abraham’s obedience to the word marks a radically new step in the religious development of man. “God is no longer seen only in cosmic phenomena, as a distant God who can inspire terror.”

The God of Abraham, he pointed out, becomes the God who guides our steps, who does not abandon us, and is the companion of our adventures.

Quoting from the Catechism, the Pope also stressed that “Abraham’s prayer is expressed first by deeds: a man of silence, he constructs an altar to the Lord at each stage of his journey.”

He continued by saying that Abraham goes wherever God leads him, even to the ultimate test of being asked to sacrifice his own son, Isaac.

The Pope emphasized that “God himself will stop Abraham’s hand ready to strike because he has seen his total obedience.”

Concluding his catechesis, the Pope said that it is healthy to sometimes get “angry” with God because it is a form of prayer. Only a son or daughter is capable of arguing with a father and making up with him again.

“Let us learn from Abraham to pray with faith: listening, walking, engaging in dialogue to the point of argument, but always willing to accept God’s word and to put it into practice.” 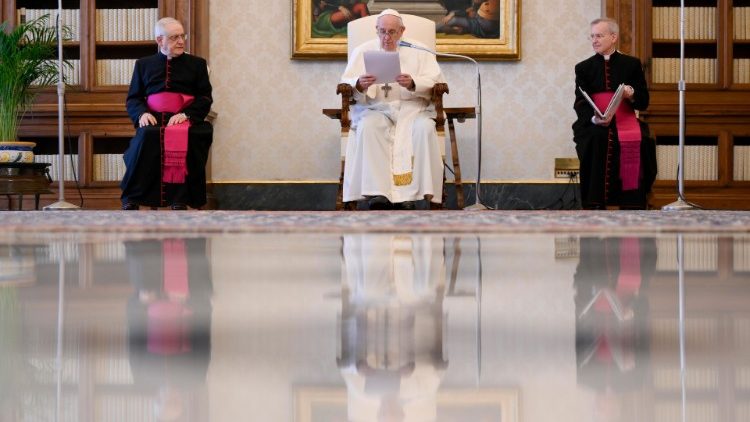