This Sunday’s Gospel (Mk 6:1-6) tells us about the disbelief of Jesus’s fellow villagers. After preaching in other villages in Galilee, Jesus returned to Nazareth where he had grown up with Mary and Joseph; and, one sabbath, he began to teach in the synagogue. Many who were listening asked themselves: “Where does he get all this wisdom? But, isn’t he the son of the carpenter and Mary, that is, of our neighbours that we know so well?” (cf. vv. 1-3). Confronted with this reaction, Jesus confirms the truth that had even become a part of popular wisdom: “A prophet is not without honour, except in his own country, and among his own kin, and in his own house” (v. 4). We say this many times…

Let us reflect on the attitude of Jesus’s fellow villagers. We could say they knew Jesus, but they did not recognise him. There is a difference between knowing and recognizing. In essence, this difference makes us understand that we can know various things about a person, form an idea, rely on what others say about that person, we might perhaps meet that person every now and then in the neighbourhood; but all that is not enough. This is a knowledge, I would say ordinary, superficial, that does not recognise the uniqueness of the person. We all run this risk: we think we know so much about a person, even worse, we use labels and close the person within our own prejudices. Jesus’s fellow villagers knew him for thirty years in the same way and they thought they knew everything! “But isn’t this the boy we saw growing up, the son of the carpenter and Mary? Where do these things come from?”. The distrust…in reality, they never realised who Jesus truly was. They remained at the exterior level and refused what was new about Jesus.

And here, we enter into the true crux of the problem: when we allow the convenience of habit and the dictatorship of prejudice to have the upper hand, it is difficult to open ourselves to what is new and allow ourselves to be amazed. We control: through attitudes, through prejudices… It often happens in life that we seek from our experiences and even from people only what conforms to our own ideas and ways of thinking so as never to have to make an effort to change. And this can even happen with God, and even to us believers, to us who think we know Jesus, that we already know so much about Him and that it is enough to repeat the same things as always. And this is not enough with God. But without openness to what is new and, above all – listen well – openness to God’s surprises, without amazement, faith becomes a tiring litany that slowly dies out and becomes a habit, a social habit.

I said a word: amazement. What is amazement? Amazement happens when we meet God: “I met the Lord”. But we read in the Gospel: many times the people who encountered Jesus and recognised him felt amazed. And we, by encountering God, must follow this path: to feel amazement. It is like the guarantee certificate that the encounter is true and not habitual.

In the end, why didn’t Jesus’s fellow villagers recognise and believe in Him? But why? What is the reason? In a few words, we can say that they did not accept the scandal of the Incarnation. They did not know this mystery of the Incarnation, but they did not accept the mystery: they did not know it. They did not know the reason and they thought it was scandalous that the immensity of God should be revealed in the smallness of our flesh, that the Son of God should be the son of a carpenter, that the divine should be hidden in the human, that God should inhabit a face, the words, the gestures of a simple man. This is the scandal: the incarnation of God, his concreteness, his ‘daily life’. And God became concrete in a man, Jesus of Nazareth, he became a companion on the way, he made himself one of us. “You are one of us”, we can say to Jesus. What a beautiful prayer! It is because one of us understands us, accompanies us, forgives us, loves us so much. In reality, an abstract, distant god is more comfortable, one that doesn’t get himself involved in situations and who accepts a faith that is far from life, from problems, from society. Or we would even like to believe in a ‘special effects’ god who does only exceptional things and always provokes strong emotions. Instead, brothers and sisters, God incarnated Himself: God is humble, God is tender, God is hidden, he draws near to us, living the normality of our daily life.

Now, in prayer, let us ask the Madonna, who welcomed the mystery of God in her daily life in Nazareth, for eyes and hearts free of prejudices and to have eyes open to be amazed: “Lord that we might meet you!”, and when we encounter the Lord there is this amazement. We meet him in the normal: eyes open to God’s surprises, at His humble and hidden presence in daily life.

News is arriving from the dear nation of Eswatini, in southern Africa, news of tension and violence. I invite those who hold responsibility, and those who are manifesting their aspirations for the future of the country, to a common effort toward dialogue, reconciliation and the peaceful settlement of different positions.

I am happy to announce that from the next 12 to 15 September, God willing, I will travel to Slovakia to make a pastoral visit, in the afternoon [of the 12th]. The Slovaks there are happy… [Numerous pilgrims from Slovakia were present] First, [the morning of that Sunday, 12 September] I will celebrate the concluding Mass of the International Eucharistic Congress in Budapest. I heartfully thank those who are preparing this journey and I am praying for them. Let us all pray for this journey and for the people who are working to organize it.

I greet all of you with affection, pilgrims from Italia and various countries, especially those from Slovakia! In particular, I greet the groups of the faithful from Cosenza, Crotone, Morano Calabro and Ostuni.

I hope all of you have a good Sunday. And please do not forget to pray for me. 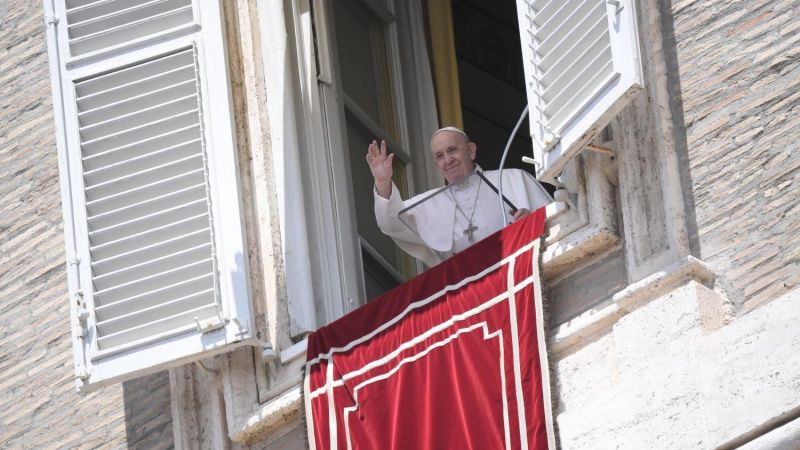