This Sunday’s Gospel passage (cf. Mt 18:15-20) is taken from Jesus’ fourth discourse in Matthew’s account, known as the discourse on the ‘community’ or the ‘ecclesial’ discourse. Today’s passage speaks about fraternal correction, and invites us to reflect on the twofold dimension of Christian existence: community, which demands safeguarding communion – that is, the unity of the Church – and personal, which obliges attention and respect for every individual conscience.

And it is not easy to put this teaching of Jesus into practice, for various reasons. There is the fear that the brother or sister may react badly; at times you may lack sufficient confidence with him or with her. And other reasons. But every time we have done this, we have felt it was precisely the way of the Lord.

However, it may happen that, despite my good intentions, the first intervention may fail. In this case it is good not to give up and say: ‘Make do, I wash my hands of it’. No, this is not Christian. Do not give up, but seek the support of some other brother or sister. Jesus says: “if he does not listen, take one or two others along with you, that every word may be confirmed by the evidence of two or three witnesses” (v. 16). This is a precept of Mosaic law (cf. Deut 19:15). Although it may seem a disadvantage to the accused, in reality it will serve to protect him against false accusers. But Jesus goes further: the two witnesses are called not to accuse and judge, but to help. ‘But let us agree, you and I, let us go talk to this man or woman, who is mistaken, who is making a bad impression. Let us go as brothers and speak to him or her’. This is the attitude of rehabilitation that Jesus wants from us. In fact Jesus explains that even this approach – the second approach, with witnesses – may fail, unlike Mosaic law, for which the testimony of two or three witnesses was enough to convict.

Indeed, even the love of two or more brothers or sisters may be insufficient, because that man or woman is stubborn. In this case – Jesus adds – “tell it to the church” (v. 17), that is, the community. In some situations the entire community becomes involved. There are things that can have an impact on other brothers and sisters: it takes a greater love to rehabilitate the brother. But at times even this may not be enough. And Jesus says: “and if he refuses to listen even to the church, let him be to you as a Gentile and a tax collector” (ibid.). This expression, seemingly so scornful, in reality invites us to put the brother in God’s hands: only the Father will be able to show a greater love than that of all brothers and sisters put together.

This teaching of Jesus helps us a great deal, because – let us consider an example – when we see a mistake, a fault, a slip, in that brother or sister, usually the first thing we do is to go and recount it to others, to gossip. And gossip closes the heart to the community, closes off the unity of the Church. The great gossiper is the devil, who always goes about telling bad things about others, because he is the liar who seeks to separate the Church to distance brothers and sisters and not create community. Please, brothers and sisters, let us make an effort not to gossip. Chatter is a plague more awful than Covid! Let us make an effort: no gossip. It is the love of Jesus, who had embraced the tax collectors and Gentiles, scandalizing the conformists of the time. However it is not a sentence without an appeal, but a recognition that at times our human attempts may fail, and that only being before God can bring the brother to face his own conscience and responsibility for his actions. If this matter does not work, then silence and prayer for the brother or sister who has made a mistake, but never gossip.

May the Virgin Mary help us to make fraternal correction a healthy practice, so that in our communities ever new fraternal relationships, founded on mutual forgiveness and above all on the invincible power of God’s mercy, may be instilled.

I greet you all, people of Rome and pilgrims from various countries families, parish groups, associations.

In particular, I greet the seminarians from the North American College of Rome; and those from the Major Seminary of Lubiana, Slovenia. I greet the youth from Cernusco sul Naviglio and those from Chiuso and Maggianico – with the yellow handkerchiefs – who are preparing for the profession of faith. I encourage everyone to cling more and more to Jesus, the Cornerstone and Good Shepherd.

I greet the women athletes affected by multiple sclerosis, who have travelled the via Francigena from Siena to Rome; and the young people from Santo Stefano Lodigiano, who came by bicycle for a charitable initiative. Both of these groups have been courageous; go forth with joy and confidence!

I also greet the faithful from other countries; I see that there are Poles, Lebanese, French, Mexicans. I greet all of you. You too, brave ones, of the Immaculate: onward!

I wish everyone a happy Sunday. Please, do not forget to pray for me. Enjoy your lunch! Arrivederci! 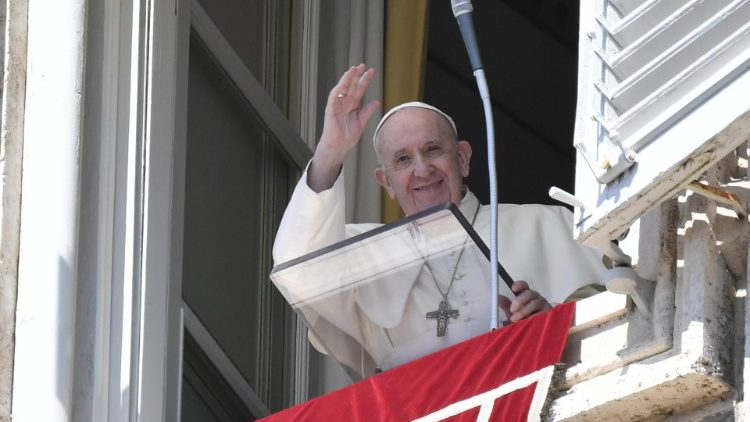