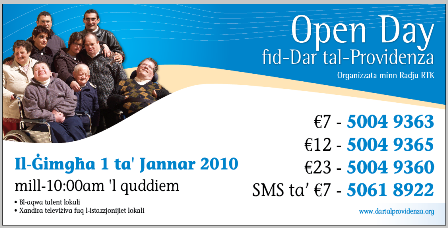 On January 1st 2010, Dar tal-Providenza in Siggiewi will host thousands of people for the next Open Day organized by Radio RTK to collect funds for the Home. The live television broadcast will start at 9.00am with Holy Mass from the chapel of the Home and will continue up to just after midnight when the total sum collected during the day will be announced. Personalities visiting the Home during the Open Day will include the President of Malta,  Dr George Abela; the Prime Minister, Dr Lawrence Gonzi; the Speaker of the House, Dr Louis Galea; the Leader of the Opposition, Dr Joseph Muscat; the Archbishop, Mons. Pawl Cremona; the Bishop of Gozo, Mons. Mario Grech and the Archbishop Emeritus, Mons. Guzeppi Mercieca.

During the day, the televised programme will include entertainment provided by the top singers on the island, various entertainers and village bands to create a festive family atmosphere. During the afternoon there will also be fun and games for children. A shuttle service is being provided to the Home from the main square in Siggiewi as well as from the old runway on Triq San Niklaw that is being turned into a parking lot. This is being done to encourage drivers to park in these sites and avoid the usual congestion that clogs the only road that leads to Dar tal-Providenza.