Pope greeted by inmates during his visit to Rome's Rebibbia prison

“‘I was in prison and you came to me’ (Matthew 25:36). These are the words of the Last Judgment, as told by the Evangelist Matthew, and these words of the Lord, in which he identifies with the prisoners, express the full meaning of my visit with you today. Wherever there is the hungry, stranger, sick, incarcerated, there is Christ himself who awaits our visit and our help. This is the main reason that makes me happy to be here, to pray, talk and listen.”

These were some of the words that Benedict XVI shared during his pastoral visit to Rebbibia prison, where he spent almost an hour speaking to the inmates and listening to their questions.

Less than a month before the Holy Father’s visit, a group of young missionaries, following that same call of Christ and his Church, brought the World Youth Day cross to another prison just south of Rome. It was on Nov. 26 that the Centro San Lorenzo International Centre for Youth brought this cross, which John Paul II bequeathed to the youth of the world 27 years ago, to the inmates of Casa Circondariale, the prison of Civitaveccia. This is the Centro San Lorenzo’s fifth prison ministry experience since 2010, having also organized missions to Rebibbia prison on three separate occasions, and once to the maximum security prison in the small town of Paliano, Italy.

The objective of the mission was to testify that the cross is infinitely salvific to every person, regardless of who they are or what they have done.

“The cross is always a symbol of hope for all people,” explained Michael Coughlan, seminarian from the Venerable English College in Rome and the mission’s organizer, “and in prisons it can be a quite hopeless time, so it’s important for us to remember that the victory of the cross is for all people. That includes those in prison — or maybe, especially those in prison. Because, whatever they’ve done, it doesn’t matter. Christ still brings his message, his hope, his forgiveness into that place.” 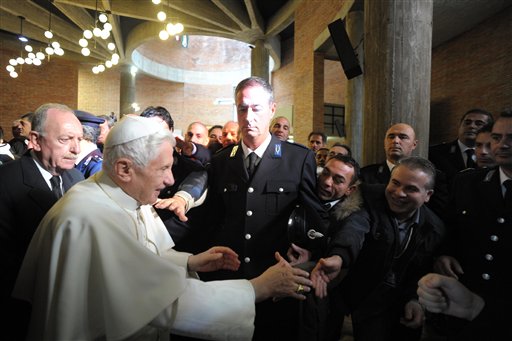