At Budapest’s majestic Heroes Square, some 1,200 Children received their First Communion. They are among the youngest pilgrims participating in the 52nd International Eucharistic Congress in Hungary.

It’s seen as a hopeful sign for a nation where the Church is still recovering from decades of Communist rule, during which Christian education for children was discouraged or forbidden.

Organizers described the Mass and other events during the Congress as “a celebration of the Real Presence of Jesus Christ in the Eucharist.”

That approach is also welcomed by non-Catholic participants such as Blanka Fabiny, a 27-year-old Lutheran kindergarten teacher. Her father is a Lutheran bishop, and her sister was part of a 1,000-strong choir at the opening Mass. “I hope that this Congress will add to the growth of the Church,” the 27-year-old kindergarten teacher told Vatican News. “I hope this Congress will help to unite Christians. We should not be separated in Christ…I hope this will help that someday all [regardless of church background] can take communion together.”

Her boyfriend Kende Hegedüs, 22, agrees. “We are Lutherans, but still we are very proud to be here and very proud at our nation that we could organize this,” he stressed. “This is not about Catholicism but about being one in Christ. So, I hope that this Congress will help Christianity in Hungary.”

He added that he hopes it will encourage families who “were ruined” during the Covid-19 pandemic in Hungary, a nation with a struggling health care system. “I hope that this Congress will help those who perhaps believe in Christ but feel lost now.” And he suggested it could help him too as he prepares to become a religion teacher or perhaps pastor.

“It is really important in my life to speak about Christ. My father is a Lutheran pastor, and I learned that from him,” Hegedüs added.

The Congress also remembers the millions of persecuted Christians worldwide who can’t openly express their faith in Christ. There’s an exhibition organized by the Hungarian National Museum and Hungary Helps, the Hungarian government’s humanitarian assistance program for suffering Christians.

And among the 25 cardinals and bishops that take part in workshops and other Congress events, several are from troubled nations in the Middle East and Africa, where many Christians have been killed for their faith.

They look with anticipation to the arrival of Pope Francis here, who will oversee the closing Mass. Hungary’s President Janos Ader invited the Pope, the Congress Secretary-General Kornél Fábry. “The president of the republic invited the Pope. He is also a Catholic man. He will give his testimony during the Congress, not only as a president of the republic but also as a father and husband,” he said.

Ahead of the Congress, thousands of homeless and other less fortunate people received special meals, including pastries with Biblical ingredients.

And there was a special meeting with the Jewish community as a sign of reconciliation. Some 600,000 Hungarian Jews perished in the Holocaust in the 1940s, just years after Hungary for the first time, organized an IEC Congress in 1938.

Cardinal Péter Erdő said he was pleased that the anthem from the 1938 International Eucharistic Congress in Hungary is being used again. He noted that the hymn gave “devout Catholics, Hungarians, strength during the war, as well as later in the decades of communism and oppression.”

Referring to Hungary’s first King, Saint Stephen, the hymn urges Hungarians to instead bow to the “King of Kings” Jesus Christ, saying in part: “Orphaned nation of Saint Stephen, Bow your head and bend your knee; Trust the King far greater even, Than that king of Hungary.” It adds: “Faithful, though besieged and harried, Trust to Him your hopes and fears, Christ who on the Cross has carried, All your hopes a thousand years.” 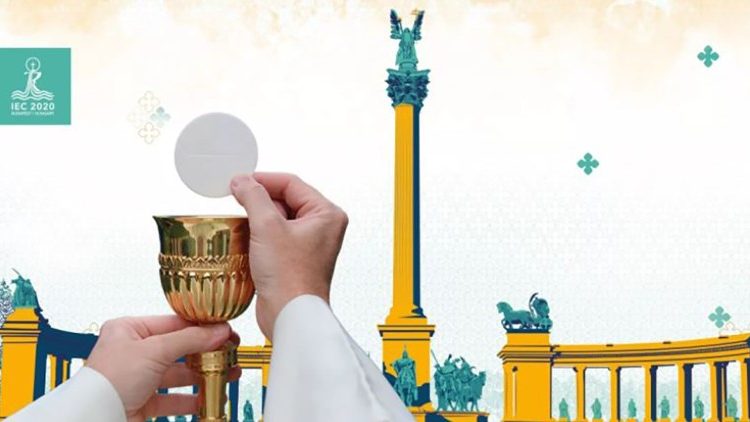