On Tuesday 12th, October, 2010, at 7:00 p.m., the Institute for Research on the Signs of the Times (DISCERN) is organizing its annual lecture on ‘The Second Vatican Council – Yesterday, Today and Tomorrow’. The guest speaker will be H.L. Mgr. Luigi Bettazzi, Bishop Emeritus of Ivrea. The lecture will be held at the Phoenicia Hotel, Floriana.

Mgr Luigi Bettazzi was born in Treviso, Italy in 1923. At the age of 40 he was nominated Auxiliary Bishop of Bologna and was consecrated Bishop by Cardinal Giacomo Lercaro. He read for a doctorate in Theology, at the Gregorian University, Rome, and then philosophy at the University of Bologna. Mgr Bettazzi has been a Lecturer at the Pontificio Seminario Regionale and was active in youth movements, especially as the National Assistant Chaplain of the Italian Federation of Catholic Students (FUCI). He took part in the three final Sessions of Vatican II. After the Council, in 1966, he was appointed Bishop of Ivrea. In 1978 Bishop Bettazzi was elected International President of Pax Christi and the same year together with brother bishops Clemente Riva and Alberto Ablondi, he asked the Vatican to offer himself as a prisoner of the Red Brigades in substitution of Aldo Moro. 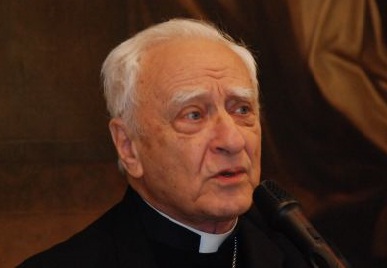