Consecrated life – Living for God and for others

Consecrated life entails giving oneself completely to God and living for others, Pope Benedict XVI said. Speaking at his weekly general audience Jan. 25, the pope continued his catechesis on Christian prayer, looking at the Last Supper, when Jesus instituted the Eucharist and the ministerial priesthood.

The pope said Jesus prayed for God’s intercession for his disciples, who, like himself, “do not belong to the world.” Consecration also entails going on missions, the pope said, as Jesus told God, “As you sent me into the world, so I sent them into the world. The consecrated person exists for others, is given to others,” and no longer lives for oneself, the pope said. “For the disciples it will be to continue Jesus’ mission, to be given to God in order to be in mission for everyone,” said the pope.

The pope prayed that all Christians follow suit and “open our own prayers to the needs of our neighbors and the whole world.” Jesus also prayed that his disciples “may all be one,” as the pope recalled the closing of the Week of Prayer for Christian Unity, which ended Jan. 25. 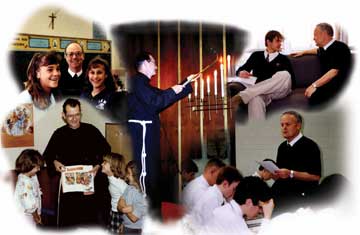