Pope Benedict XVI has admitted he faced “choppy waters” during his eight years at the helm of the Roman Catholic Church, but says he was guided by God and felt his presence every day.

The Pope, 85, will retire on Thursday – the first pope to abdicate since Gregory XII in 1415.

Thousands of pilgrims gathered in St Peter’s Square in the Vatican for Pope Benedict’s final general audience. His successor will be chosen in a conclave to take place in March.

Pope Benedict told the crowd his papacy had been “a heavy burden” but he accepted it because he was sure that God would guide him.

At times he “felt like St Peter with his apostles on the Lake of Galilee”, he said, making reference to the Biblical story when the disciples were battling against heavy waves and Jesus Christ appeared to them.

The Church has been beset by scandals over sexual abuse by priests and leaked confidential documents revealing corruption and infighting in the Vatican.

The Pope thanked his flock for respecting his decision to retire and said he was standing down for the good of the Church.

“I took this step [resignation] in full awareness of its gravity and novelty but with profound serenity of spirit,” he said in his address.

Benedict XVI will be “Pontiff emeritus” or “Pope emeritus”, as Fr. Federico Lombardi, S.J., director of the Holy See Press Office, reported in a press conference on th final days of the current pontificate. He will keep the name of “His Holiness, Benedict XVI” and will dress in a simple white cassock without the mozzetta (elbow-length cape). 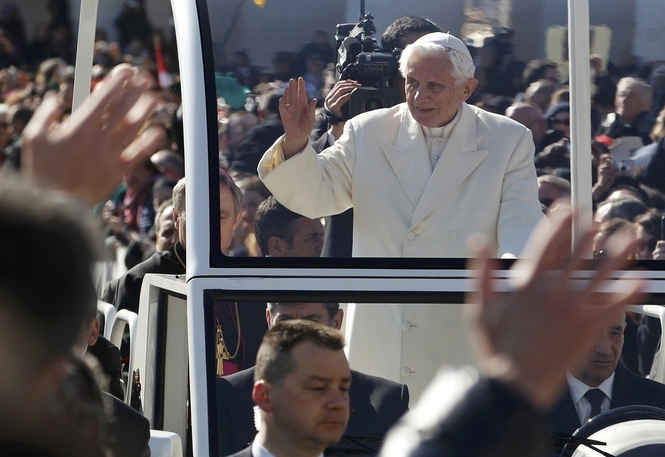