Pope Francis presides over the Way of the Cross on the evening of Good Friday, with families offering meditations for each of the 14 Stations based on their own experiences of suffering and hope.

The traditional Via Crucis returned on Good Friday evening to the Colosseum in Rome for the first time since 2019, a hiatus of nearly three years.

Pope Francis presided over the event, leading the over 10,000 faithful present in the prayers of the Stations of the Way of the Cross, which follow the events of Jesus’ Passion and death.

Though the roots of the Via Crucis at the Colosseum date back many centuries, the modern-day tradition began in 1964 when Pope St. Paul VI presided over the event. He and subsequent Popes continued the practice each year until the pandemic struck in 2020.

One family in Father’s house of peace

The Way of the Cross began with the hymn Adoramus Te (“We Adore You”).

Pope Francis then recited an opening prayer which brought to mind the power hidden in the suffering and Cross of Christ, as well as the many aspects of family life and the hope found amidst trials.

The Risen Jesus, prayed the Pope, has offered humanity the gift of salvation and has promised to dry every tear and turn all peoples into “a great family in Your house of love and peace.”

Each of the fourteen Stations saw a different family carry the cross, as a Gospel passage was proclaimed and a meditation was offered.

The Pope concluded each Station with a prayer and the choir sang a verse of the Stabat Mater hymn.

Two families on opposite sides of a war

The Way of the Cross meditations were written by fifteen families associated with Catholic volunteer groups, and explored various aspects of the trials and tribulations facing families across the world.

The highlight of the meditations came in the 13th Station, which saw two women carry the cross together: Albina hails from Russia and Irina from Ukraine.

Instead of the prepared meditation, silence spoke louder than any words.

The two women – friends and both nurses in Rome – held the cross and looked into each other’s eyes in a glance that seemed to communicate all the pain of brothers at war and the undying hope of peace and reconciliation.

A moment’s silence was observed, and everyone prayed for God’s gift of peace.

Light of Gospel amid darkness of suffering

Pope Francis offered no homily or reflections for the Via Crucis, allowing the families’ personal experience to speak for itself.

In his final prayer for the event, the Pope prayed that the light of the Gospel might remain lit in the hearts of all families, in the midst of joys and sorrows, trials and hopes.

And he asked God to let forgiveness and peace overcome our “rebellious hearts” which seek to distance us from God. 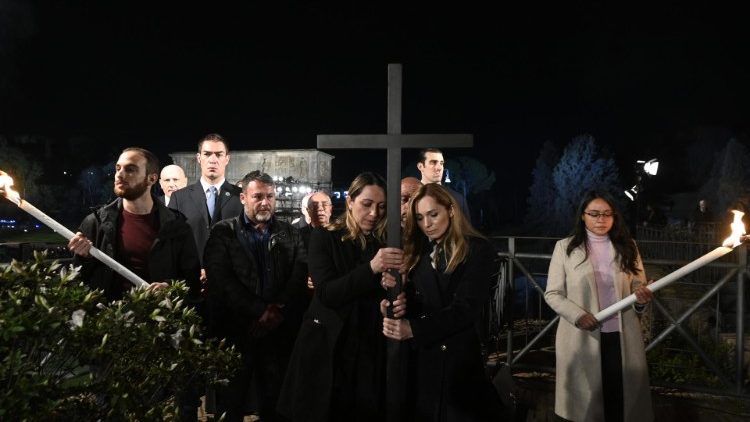