Today we will talk about Judith, a biblical heroine. The conclusion of the book that bears her name – we have listened to a passage – summarizes the final part of the life of this woman, who defended Israel from its enemies. Judith is a young and virtuous Jewish widow who, thanks to her faith, beauty and cunning, saved the city of Bethulia and the people of Judah from the siege of Holofernes, general of Nebuchadnezzar king of Assyria, an overbearing and contemptuous enemy of God. And so, with her astute way of acting, she was able to behead the dictator who came against the country. She was brave, this woman, but she had faith…

After her great adventure, Judith returned to live in her town, Bethulia, where she lived beautifully her old age, until she was one hundred and five. As it arrives for many people: sometimes after an intense life of work, sometimes after an adventurous existence, or one of great dedication. Heroism does not consist only of the great events that fall under the spotlight, such as that of Judith, who killed the dictator; it is often found, this heroism, in the tenacity of love poured out in a difficult family and on behalf of a threatened community.

Judith lived more than a hundred years, a particular blessing. But it is not uncommon today to live many years after retirement. How do we interpret, how do we make the most of this time we have? I will retire today, and will have many years ahead of me, and what can I do, in these years? How can I grow – in age, that takes care of itself; but how can I grow in authority, in holiness, in wisdom?

The prospect of retirement coincides for many people with that of a deserved and long-awaited rest from demanding and wearisome activities. But it also happens that the end of work can be a source for worry, and is accompanied with some trepidation. “What will I do, now that my life will be emptied of what filled it for so long?”: this is the question. Daily work also means a set of relationships, the satisfaction of earning a living, the experience of having a role, well-deserved recognition, a full-time job that goes beyond working hours alone.

Certainly, there is the task, joyful and tiring, of looking after grandchildren, and today grandparents have a very important role in the family in helping to raise grandchildren; but we know that ever fewer children are born nowadays, and parents are often farther away, more subject to displacement, with unfavourable work and housing conditions. At times they are also more reluctant to leave space to grandparents for education, granting only what is strictly linked to the need for assistance. But someone said to me, with an ironic smile, “Nowadays, in this socio-economic situation, grandparents have become more important because they have a pension”. They think in this way. There are new demands, also within the area of educational and family relations, that require us to reshape the traditional connection between the generations.

But, let us ask ourselves: are we making this effort to “reshape”? Or do we simply suffer the inertia of material and economic conditions? The co-presence of generations is, in fact, lengthening. Are we all trying together to make these conditions more human, more loving, more just, according to the new conditions of modern societies? For grandparents, an important part of their vocation is to support their sons and daughters in the upbringing of their children. The little ones learn the power of tenderness and respect for frailty: irreplaceable lessons that, are easier to impart and receive with grandparents. For their part, grandparents learn that tenderness and frailty are not solely signs of decline: for young people, they are conditions that humanize the future.

Judith was soon widowed and had no children, but, as an old woman, she was able to live a season of fullness and serenity, in the knowledge that she had lived to the fullest the mission the Lord had entrusted to her. It was time for her to leave the good legacy of wisdom, tenderness, and gifts for her family and her community: a legacy of goodness and not only of goods. When we think of a legacy, at times we think of goods, and not of the goodness that is done in old age, and that has been sown, that goodness that is the best legacy we can leave.

It was precisely in her old age that Judith “granted freedom to her favourite handmaid.” This is a sign of an attentive and humane approach to those who had been close to her. This maid had accompanied her at the moment of that adventure, to win over the dictator and to cut his throat. When we are old, we lose some of our sight, but our inner gaze becomes more penetrating – one sees with the heart. We become capable of seeing things that previously escaped us. The elderly know how to look, and they know how to see… It is true: the Lord does not entrust his talents only to the young and the strong. He has talents for everyone, made to fit each person, the elderly too. The life of our communities must know how to benefit from the talents and charisms of so many elderly people who are already retired, but who are a wealth to be treasured. On the part of the elderly themselves, this requires a creative attention, a new attention, a generous availability. The previous skills of active life lose their constraint and become resources to be given away: teaching, advising, building, caring, listening…preferably in favour of the most disadvantaged who cannot afford any learning or who are abandoned in their loneliness.

Judith freed her maid and showered everyone with attention. As a young woman, she had won the esteem of the community with her courage. As an old woman, she garnered esteem because of the tenderness with which she enriched their freedom and affections. Judith is not a pensioner who lives the emptiness it brings melancholically: she is a passionate mature woman who fills the time God gives her with gifts. Remember: one of these days, take the Bible and look at the Book of Judith: it is very short, you can read it … it is ten pages long, no more. Read this story of a courageous woman who ends up this way, with tenderness, generosity, a worthy woman. And this is how I would like all our grandmothers to be: courageous, wise, and who bequeath to us not money, but the legacy of wisdom, sown in their grandchildren. Thank you.

I address a special thought to the people of Sri Lanka, especially the young, who in recent times have made their voices heard in the face of the challenges and the social and economic problems of the country. I join with religious leader in urging all sides involved to maintain a peaceful approach, without giving in to violence. I appeal to all those with responsibility to listen to the aspirations of the people, guaranteeing the full respect of human rights and civil liberties. 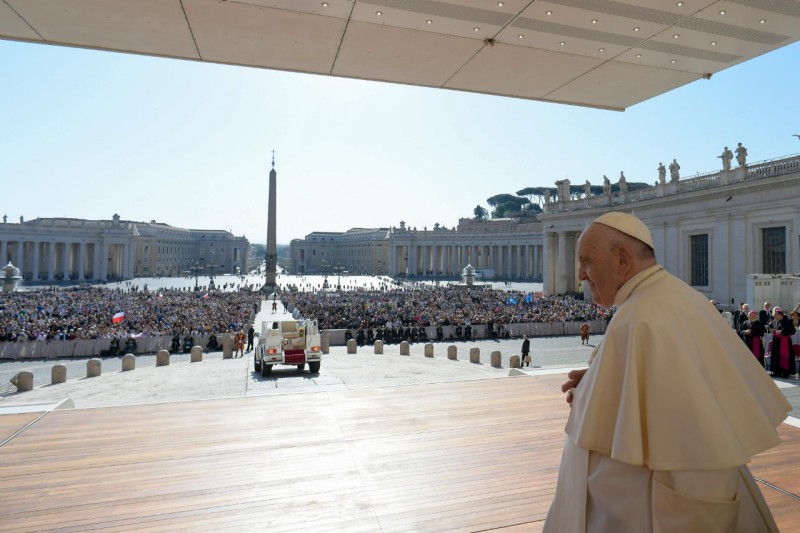