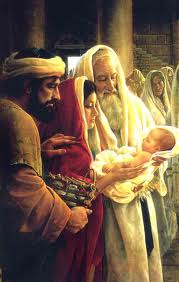 And when the day came for them to be purified in keeping with the Law of Moses, the parents of Jesus took him up to Jerusalem to present him to the Lord- observing what is written in the Law of the Lord: Every first-born male must be consecrated to the Lord- and also to offer in sacrifice, in accordance with what is prescribed in the Law of the Lord, a pair of turtledoves or two young pigeons. Now in Jerusalem there was a man named Simeon. He was an upright and devout man; he looked forward to the restoration of Israel and the Holy Spirit rested on him. It had been revealed to him by the Holy Spirit that he would not see death until he had set eyes on the Christ of the Lord. Prompted by the Spirit he came to the Temple; and when the parents brought in the child Jesus to do for him what the Law required, he took him into his arms and blessed God; and he said: Now, Master, you are letting your servant go in peace as you promised; for my eyes have seen the salvation which you have made ready in the sight of the nations; a light of revelation for the gentiles and glory for your people Israel. As the child’s father and mother were wondering at the things that were being said about him, Simeon blessed them and said to Mary his mother, ‘Look, he is destined for the fall and for the rise of many in Israel, destined to be a sign that is opposed- and a sword will pierce your soul too — so that the secret thoughts of many may be laid bare.’

The Saint of the day: St Thomas a Becket