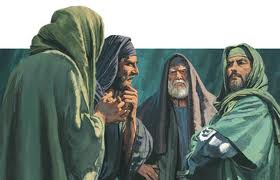 Many of the Jews who had come to visit Mary, and had seen what he did, believed in him, but some of them went to the Pharisees to tell them what Jesus had done. Then the chief priests and Pharisees called a meeting. ‘Here is this man working all these signs,’ they said, ‘and what action are we taking? If we let him go on in this way everybody will believe in him, and the Romans will come and suppress the Holy Place and our nation.’ One of them, Caiaphas, the high priest that year, said, ‘You do not seem to have grasped the situation at all; you fail to see that it is to your advantage that one man should die for the people, rather than that the whole nation should perish.’ He did not speak in his own person, but as high priest of that year he was prophesying that Jesus was to die for the nation- and not for the nation only, but also to gather together into one the scattered children of God. From that day onwards they were determined to kill him. So Jesus no longer went about openly among the Jews, but left the district for a town called Ephraim, in the country bordering on the desert, and stayed there with his disciples. The Jewish Passover was drawing near, and many of the country people who had gone up to Jerusalem before the Passover to purify themselves were looking out for Jesus, saying to one another as they stood about in the Temple, ‘What do you think? Will he come to the festival or not?’

The Saint of the day: St Benjamin