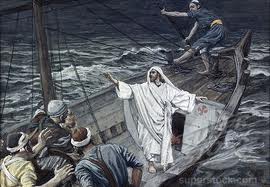 With the coming of evening that same day, he said to them, ‘Let us cross over to the other side.’ And leaving the crowd behind they took him, just as he was, in the boat; and there were other boats with him. Then it began to blow a great gale and the waves were breaking into the boat so that it was almost swamped. But he was in the stern, his head on the cushion, asleep. They woke him and said to him, ‘Master, do you not care? We are lost!’ And he woke up and rebuked the wind and said to the sea, ‘Quiet now! Be calm!’ And the wind dropped, and there followed a great calm. Then he said to them, ‘Why are you so frightened? Have you still no faith?’ They were overcome with awe and said to one another, ‘Who can this be? Even the wind and the sea obey him.’

The Saint of the day: St Thomas Aquinas